While we were waiting for dinner last night the lightening started, then the thunder and finally the rain came – in bucket loads! Which given that there was no water in the taps at the hotel was something of an irony!

Eventually my burger arrived – about two hours after it had been ordered, but poor Kevin and Brian still hadn’t had their dinner and were then told that there were no more eggs, so no more omelettes! Frustration overload after so long waiting for something which was never going to come.

I dashed across the car park to my tent which was also in the perfect location for rain – far enough back on the veranda that I didn’t need the fly on, but still nice and cool unlike the people actually in the conference room.

One significant bonus of the rain was that it kept the music in town off – in the end I slept from around 1100 to just after 0400 completely uninterrupted – the longest I’ve slept in one go in so long I can’t remember the last time.

Unfortunately the call to prayer woke people around me and they started shuffling round from 0400 despite the fact that we didn’t need to be at riders meeting till 0630.

The rain continued off and on through till riders meeting so that and breakfast were both in the conference room, but by the time we were ready to ride it had stopped and stayed that way all day. 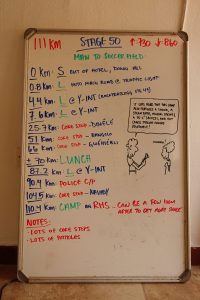 Out on the road and there were puddles and mud all over the place – another reason to be thankful that we were on pavement all day! The market wasn’t really happening yet so it was significantly easier to get through to the road than it had been on the way in and before long we’d done the back-tracking that we needed to and were making progress.

Initially I was riding on my own, catching up with a number of other riders before catching Erin who I rode with for a while having a chat as we went.

A short while later Canadian Kevin came past with a train of people in his wake – Ella, Julian, Natalie, Hanne and Pär so we jumped on the back as well – would have been rude not to.

A while later Julian came forward, but was too fast for the group so soon pulled ahead, with Natalie electing to go with him. I stayed at the front till the next hill by which time I too had pulled well ahead, so I elected to leave them to it and catch up with Julian and Natalie instead.

In the process of chasing them down I caught up with Kim and we rode together for a time until she stopped for a comfort break. At 52km I stopped for morning tea and the three of them got back ahead of me again while I ate my banana.

It took me a while to catch Kim again, and just as I did we saw Max’s truck coming back towards us – it’s never a good sign to see a TDA vehicle going back along the route at that hour of the day since it almost certainly means a problem.

Kim had set a personal target for the day of being to lunch by 0930 – at the point we were discussing this it was 0925 and according to the planned lunch at 70km we still had 3km to go so that wasn’t quite going to work out.

As we were working through that she said “isn’t that the dinner truck stopped up there” and sure enough it was the dinner truck just pulling away from lunch which had ended up at 67.5km so she met her target of being there by 0930 – hoorah!

The bad news as we got in was the Andre had fallen at 44km and was confirmed to have a broken collar bone – the only good news for him was that Tom had been riding today and was only a few km back when it happened so had been quickly on the scene.

Max and Philippa had gone back to collect him and head back to Man – it was the nearest town with a medical facility and an airport!

As a result we were asked to take our time at lunch so that the dinner truck could get ahead and select a suitable campsite – it seems there are a few options based on the current state of the site and where they can find the greatest amount of shade. 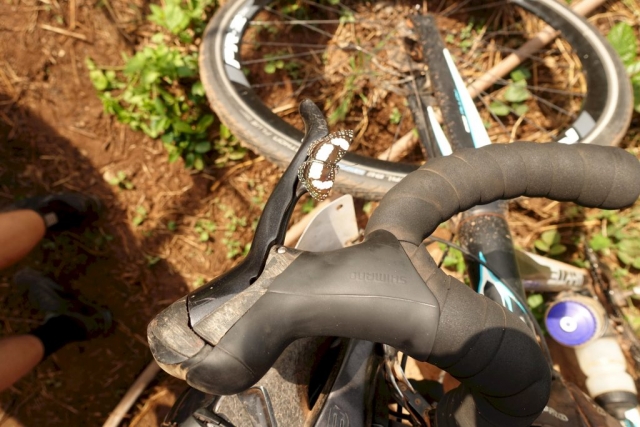 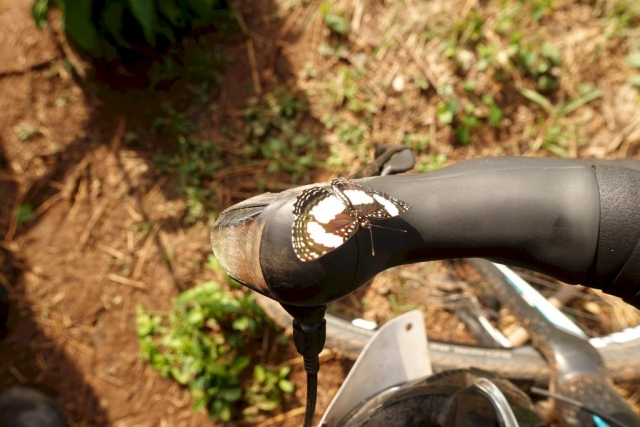 In the end I spent almost an hour at lunch and set off on my own, not really seeing anyone else until I caught Australian Kevin at 95km.

In other countries that we’ve passed through the locals don’t seem to ride bikes – lots of scooters and motorbikes and horses and donkeys, but no bicycles. Cote d’Ivoire is the exception to that – there are people on bikes all over the place which is such a contrast – I’m used to seeing a bike ahead and being able to work out who it is, but not here!

As I came through the town at 104km it was pretty obvious where the shop with the cold drinks was – a huge collection of locals all standing round staring at the riders who were there – quite a group as I rolled in!

From there to camp was only a few kilometres, and in fact fewer than expected because the selected site are the school grounds just before the village, rather than a soccer field in it which has worked out quite well. 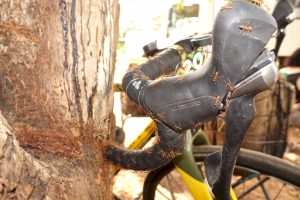 Australian Kevin and I are under a tree which will provide all afternoon sun, though it does come with the drawback of having a huge number of ants also there – mind you pretty much every tree seems to have swarms of large red biting ants – check out Julian’s handlebars!

An update on Andre suggests that he needs surgery, but that’s not possible in Man so he’s going to have to get to Abidjan – the bad news is it’s either a 500km road trip, or wait for the next plane on Saturday (there are only three a week and he just missed the Thursday one!). Both Max and Philippa are there with him to try and help get him the care he needs as quickly as possible!

We’ve ended up with more rain today too. The clouds started rolling in around 1630, the thunder around 1700, and the rain just as we were having riders’ meeting – initially it was only a light sprinkle, but now as I’m writing this in my tent at 1900 it’s properly raining.

Given this is the first rainy evening we’ve had on the entire tour I think we’re pretty fortunate, though it does highlight the issue of having fallen off my bike a week or so back because I can’t sit cross-legged in my tent because my right ankle is still skinned and too sore for that. 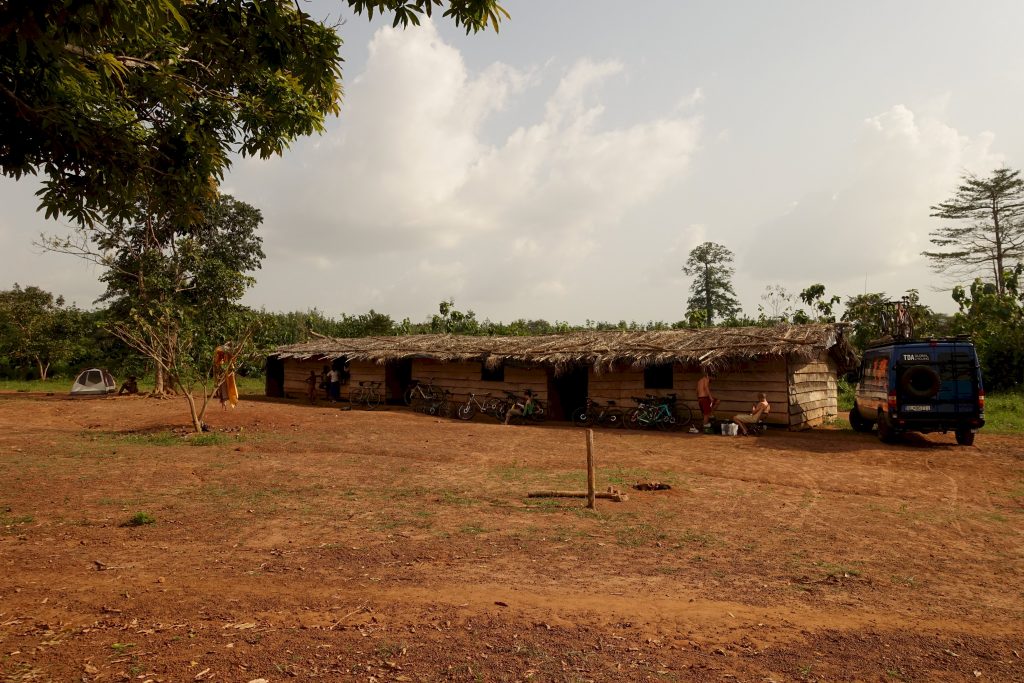 ‘Prefab’ classrooms at the school we’re camped at – see below for a couple of interior shots. 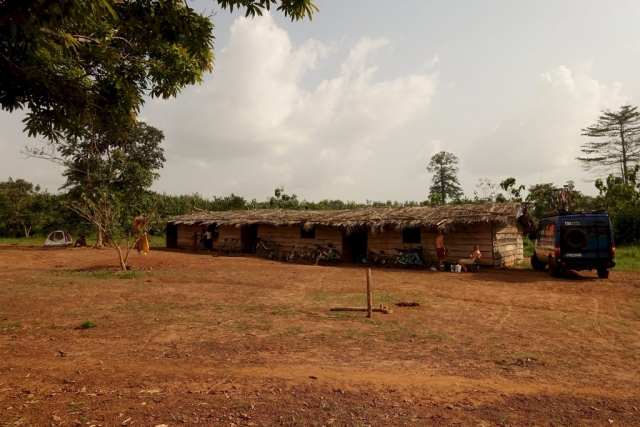 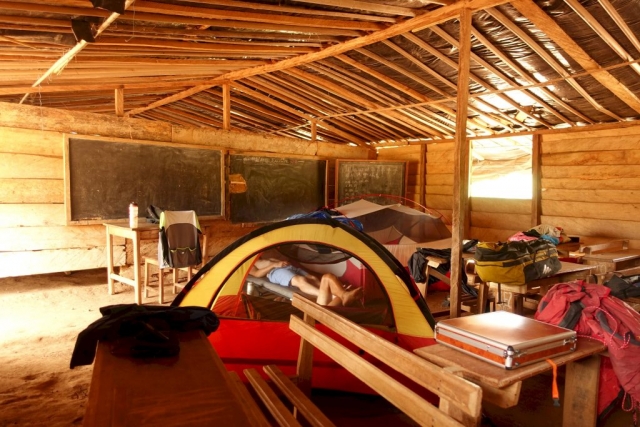 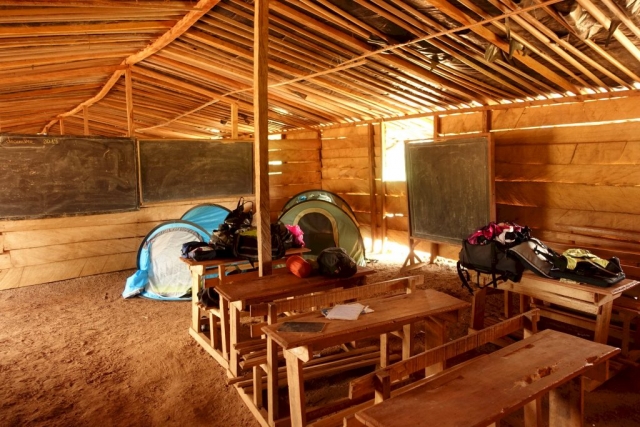