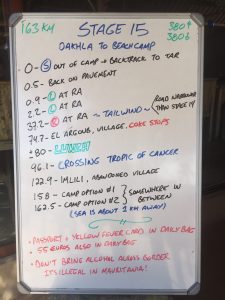 My house mates decided that we needed to be up way too early for my liking, and I was sleeping in the ‘lounge’ of the bungalow it meant once they were up, so was I!

On the plus side, that meant I got coffee with my breakfast before they ran out in the hotel dining room – this time they really did under-estimate what it was were were going to consume, and how quickly we were going to do it.

Out on the road and briefly the wind was behind us as we worked our way back to the sealed road, but then we headed east, and shortly later north to get back off the peninsula. We quickly got back into our 1km ‘pull’ routine and were moving more quickly and easily than we had expected – it wasn’t easy, but it wasn’t as bad as the previous 164k day had been.

Continuing on and after a time Dominic caught us and jumped into our rotation which gave us an extra break from the wind. For a time it was more to the side, so we were riding two up, with 1 and 3 being tough going, 2 and 4 the ‘cruise’.

We passed Erwin, Paul and Jacqui as we got to the golf course. Over the rise and across the causeway which put us directly into the wind and slowed things up. Off the causeway. over the construction area and up to the service station by the round about. We’d averaged 21.5 km/h getting there, which was a far cry from the 33 km/h we’d done on the way in – but were glad to have that done.

Turning south, and tail wind wasn’t quite what we’d hoped for, which coupled with the rougher pavement – this is ‘tar and chip’ rather than the asphalt of the new road we’d been enjoying the previous riding day – and we weren’t up to the speeds that we’d expected to be. Still it was vastly better than pushing into the wind!

It also took as a really long time to get past Dakhla on the peninsula beside us (you maybe have to squint to see it over there on the horizon). 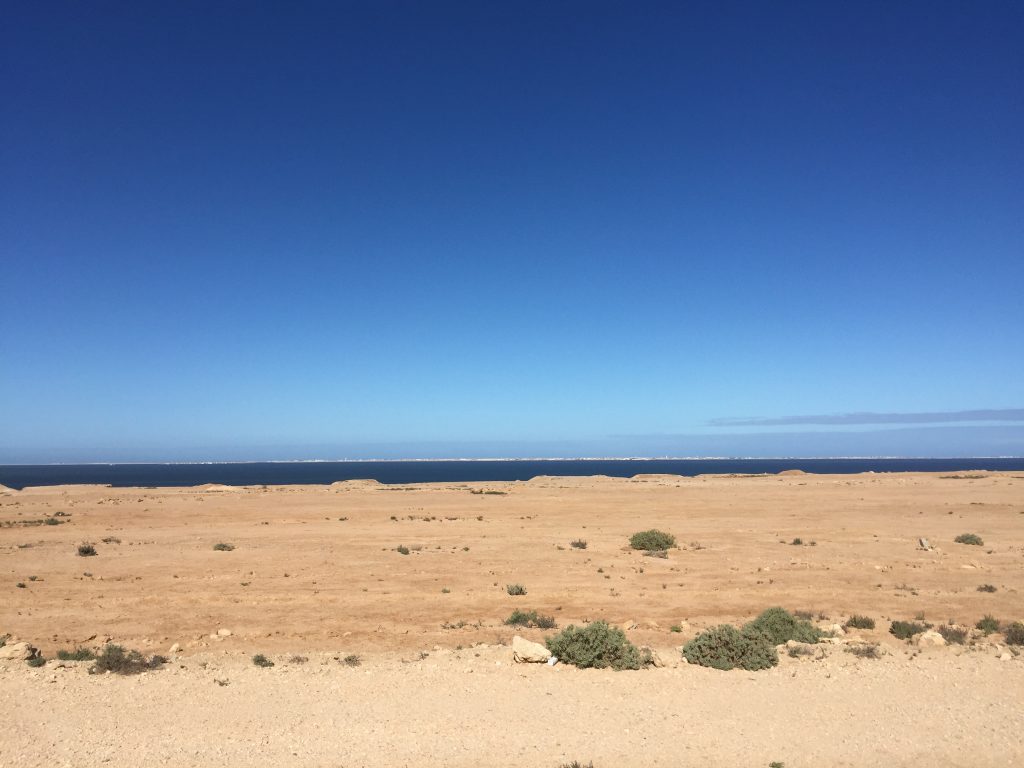 We continued on and eventually got in to lunch. The usual sandwiches, a pee, refill the water bottles and we were back on the road. Also with the news that camp was at the ‘shorter’ location at 158km – something to look forward to 🙂

By now the wind had really picked up and for a time we were racing along at over 40 km/h with Doug the tour mechanic who had a day ‘off’ so was getting to ride the full day, something he was really enjoying.

The highlight of the day, and frankly the only thing of any note once we were back in the desert was crossing the Tropic of Cancer. Somewhere there’s a photo of our group at the sign, but that’s on someone else’s phone, so here’s one of just me! 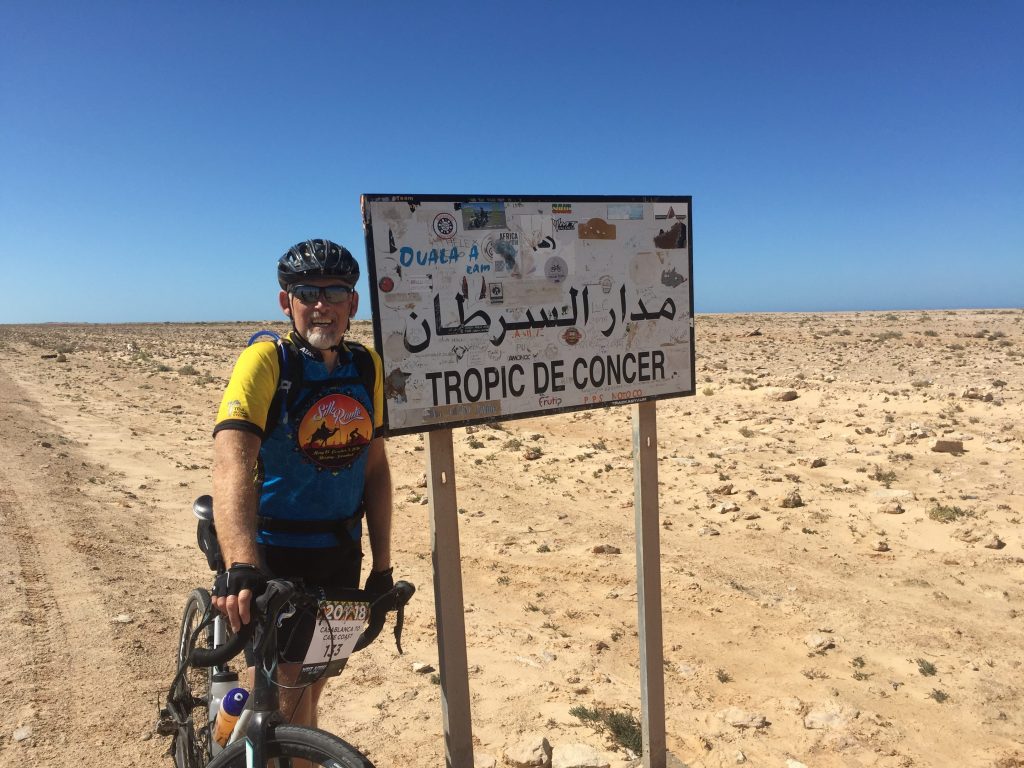 After our photo stop we got back on the road and were making good progress again, but Canadian Kevin and I were too fast for Australian Kevin so we pushed on, with Mateo electing to join us. There’s been so little traffic that mostly Kevin and I have been riding side-by-side with Mateo sitting behind, but between us ‘in our pocket’ as he puts it – his estimate is that despite the tail wind he’s saving 25 – 30% of effort by being there. He’s got a very sore arse right now, so anything he can do to minimise that is very welcome.

For most of the day the road was heading south, but at one point we had to head inland to skirt around a park – and this meant heading both east, and up hill – it was only for about 10km, and we only climbed about 50m, but in the wind it was seriously hard work.

Once we swung back south we were back up to great speeds, and by the time we came into camp we’d got our average for the day up to 27.2 km/h which was pretty pleasing after the slow start.

In to camp and it was pretty windy where we were, camped beside the road-man’s compound, and across from the cell tower! I was almost finished my wash, when the wind swung about 25 degrees, and increased by about 10 knots to be a real howler.

With the change in direction my tent was no-longer head-to-wind which means a. it threatens to self-destruct with each gust, and b. all the fine dust (of which there’s plenty in the Sahara) comes in through the mesh. With the help of some additional rocks I managed to swing it back into line, and also cleaned out as much of the dust as I could.

The remainder of the afternoon wasn’t terribly comfortable – it was too hot in the sun, too cold in the wind in the shade, and there was nowhere which was sheltered and shady. I took a wander to help fill in the time.

180 degrees from the ridge towards the ocean

180 degrees from the ridge towards the land

Looping back round I discovered dinner in trays over the coals – no idea what’s in there yet, but not too much longer to wait! 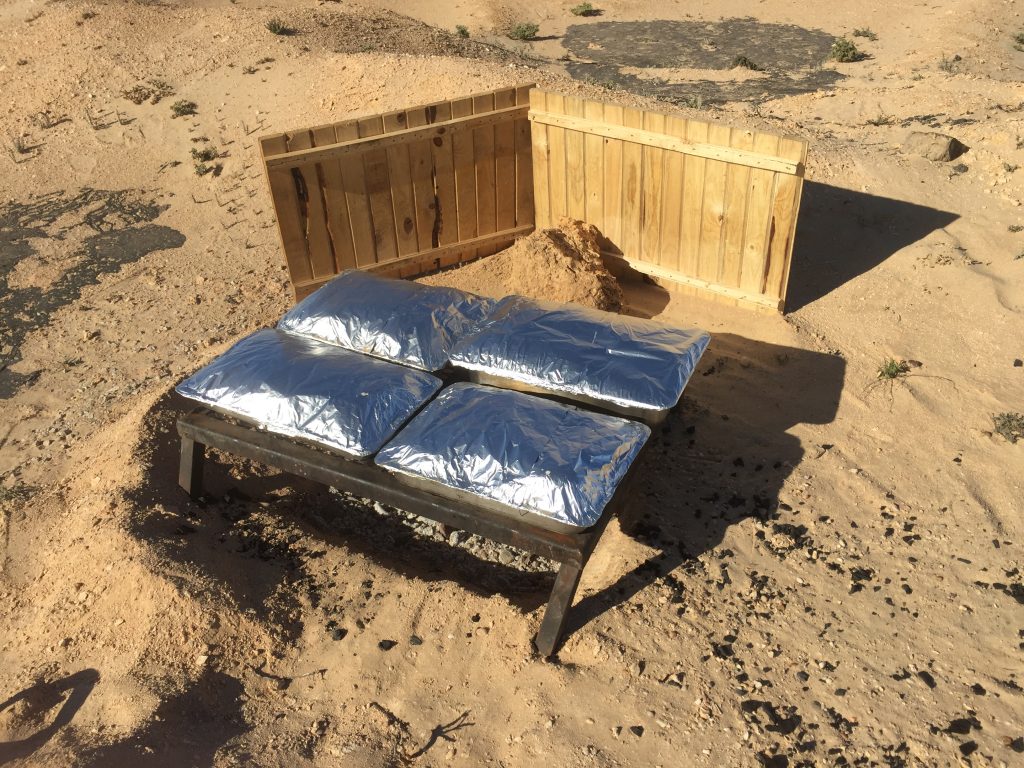 I also startled this little fellow who took off across the sand, but was then quite happy for me to get up close for photographs once he (she? how do you tell the gender of a lizard hiding under a bush?) 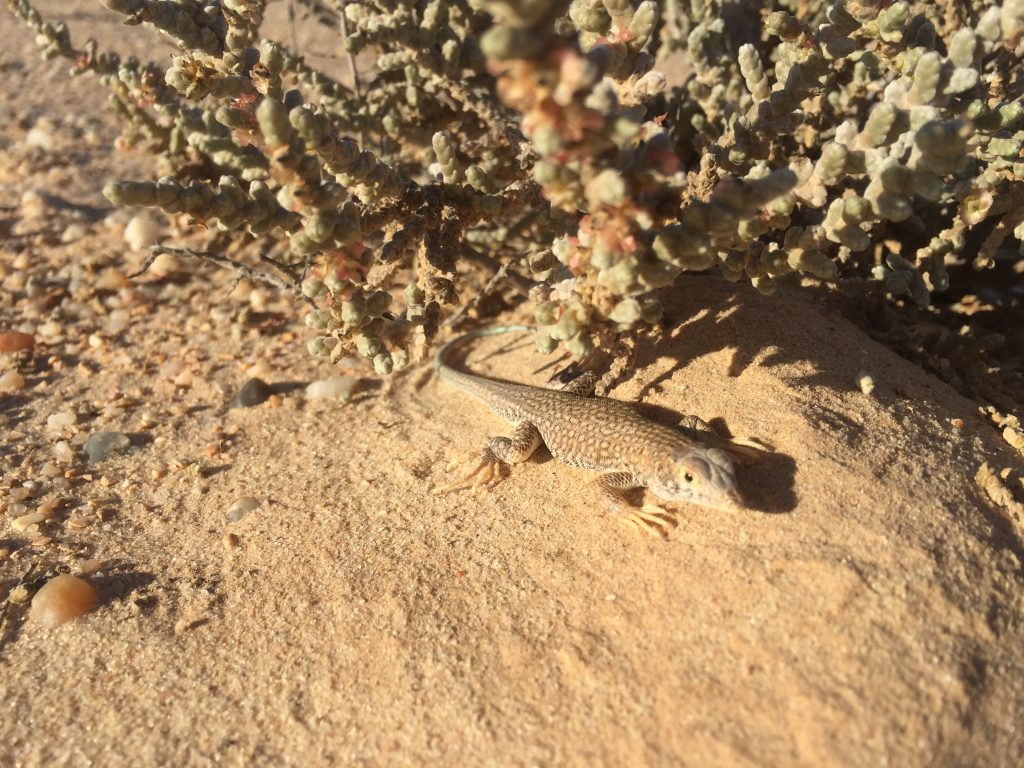 Peter was also back with us today – last we’d heard he was getting a wheel shipped, however that was going to take three weeks, so in the end he got a taxi fro the town Max had dropped him in to Laayoune – flew from there to the Canary Islands, and then back to California – he spent one and a half days there, before returning to Dakhla, with new wheel fitted.

His story of getting to Laayoune is rather amusing – he was at the side of the road with his bike box and a 30kg duffel bag. A taxi approached so he flagged it down – a VW golf – at that point it had three people in the back so he said to the driver ‘this isn’t going to work’. Not to be deterred, the bike went in the back, about half sticking out while the duffel bag went on the laps of the people in the back seat, and Peter (who is about 6ft tall) went in the passenger’s seat!

Dinner proved to be ‘roast’ chickens which had been baked over the coals in the trays you see above – a clever way of doing things, and the meat was moist and tasty as well.

After dinner I helped the crew to get the sun-shades from the sides of the dinner truck onto the roof – it’s a four person operation in good conditions, but with the wind still howling the more hands the safer it was to get them up on the roof and packed away.

From there it was time to head into my tent, clear out the last of the dust, get ready for the morning and write up the day. Now it’s time for sleeping. 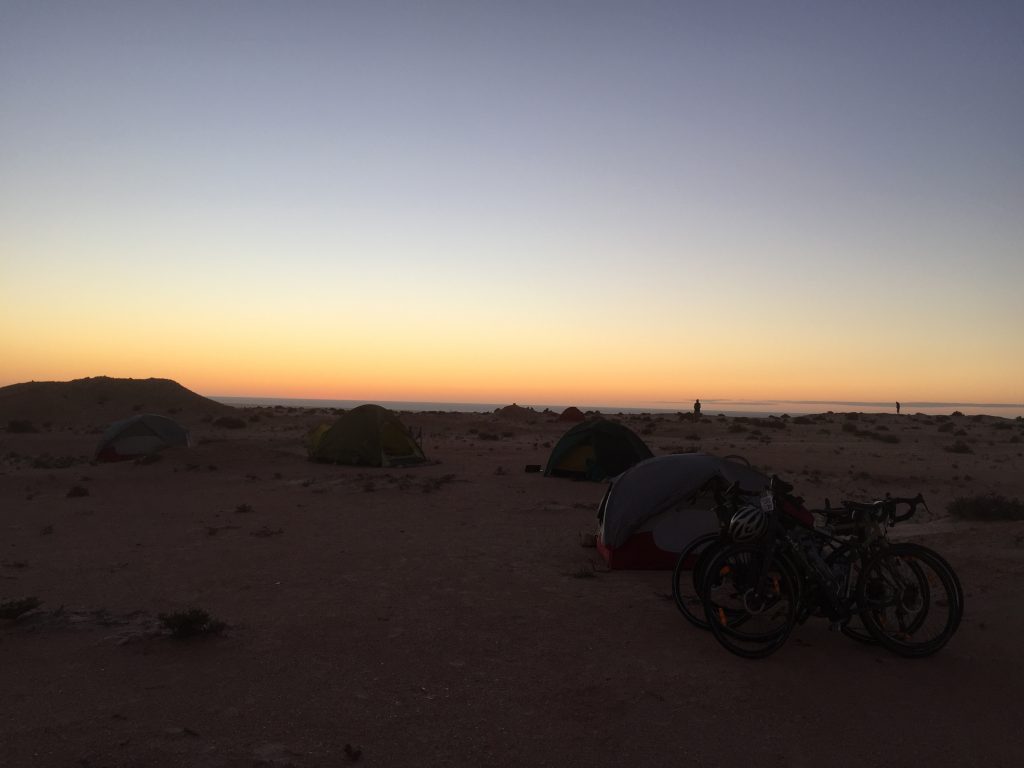 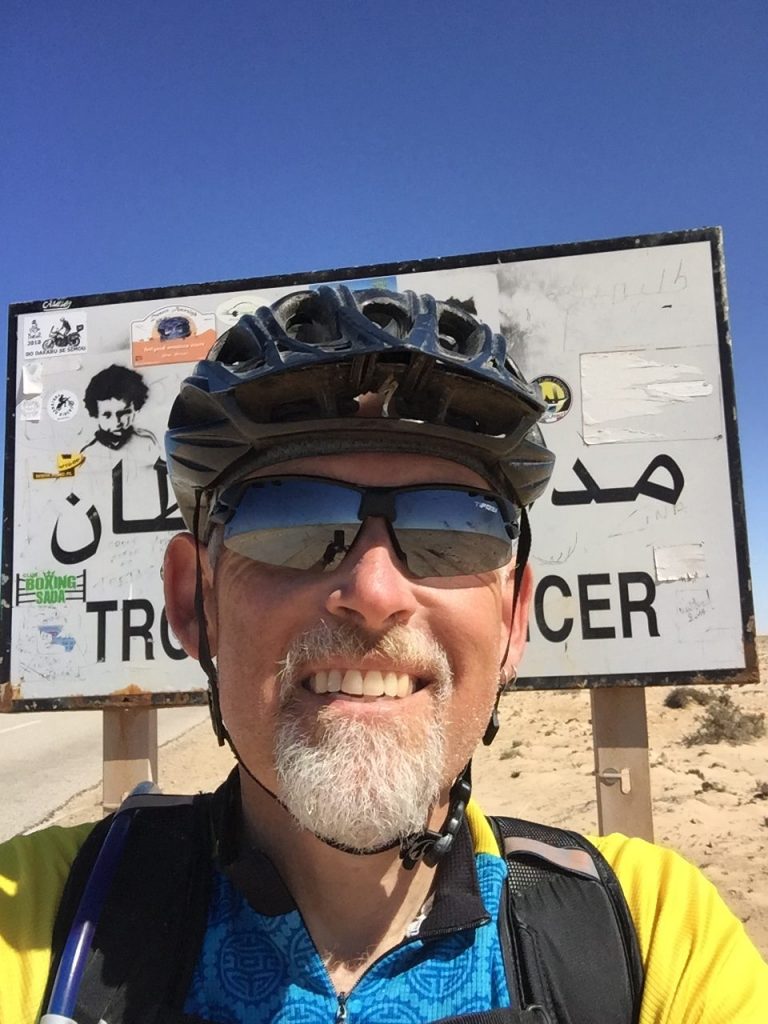 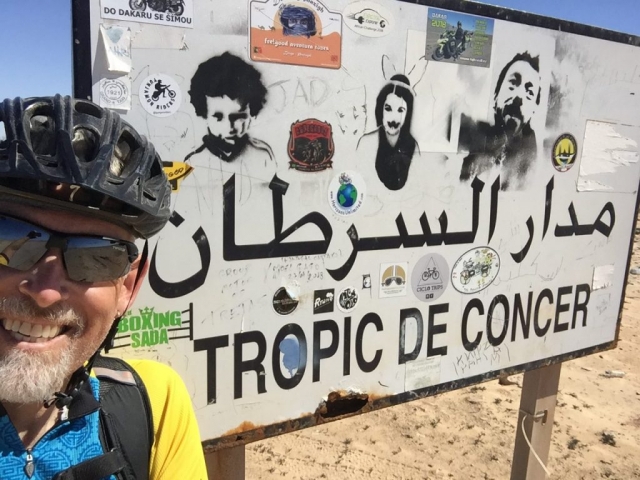 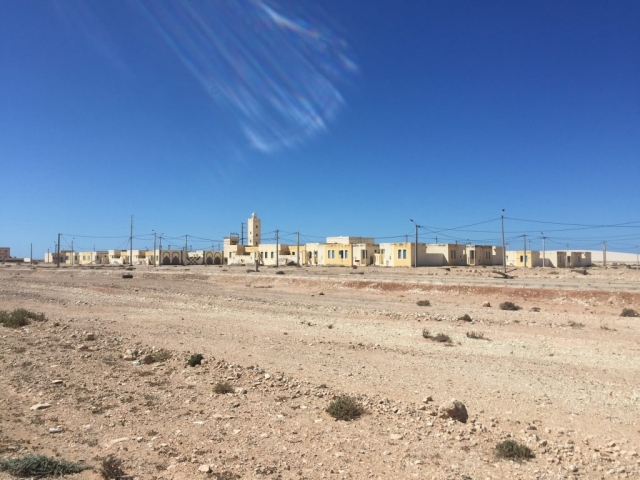 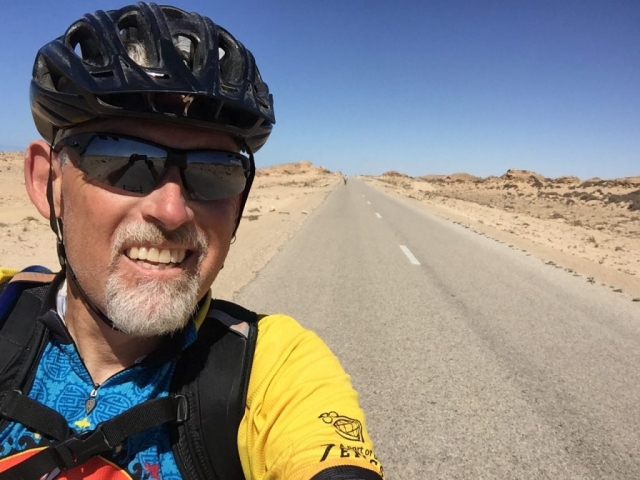 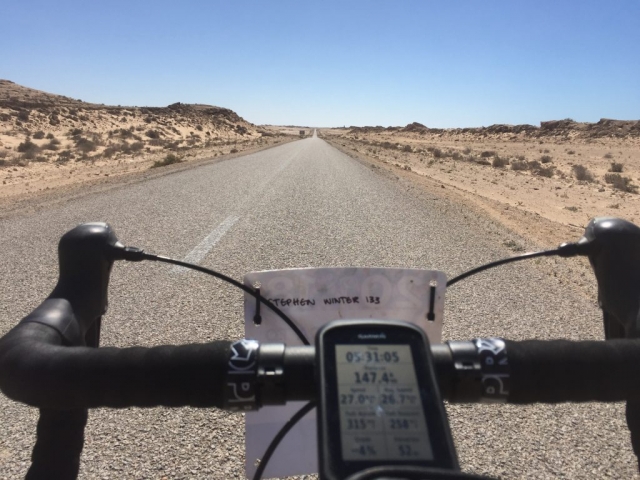 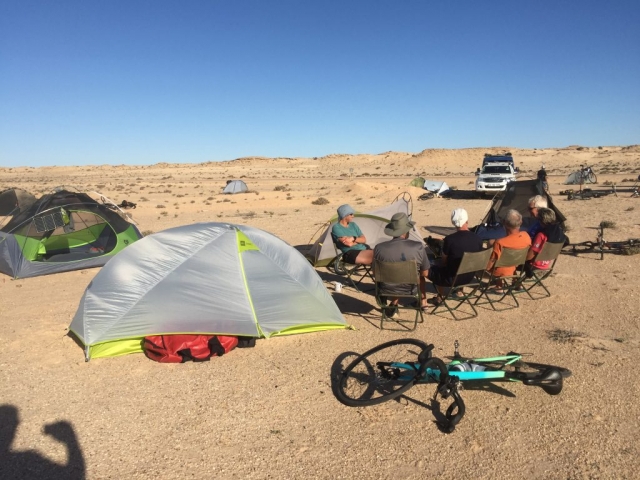 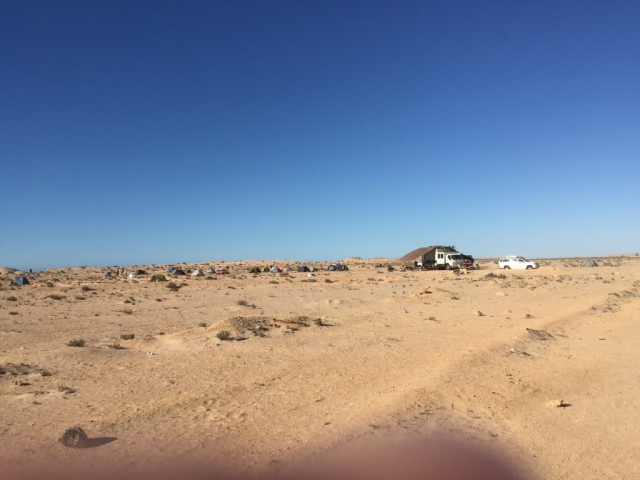