Awake too early this morning thanks to what sounded like a gunshot at 0408 after which the street lights shining through the window, the noise of the traffic, and the increasing movement of others round the hotel prevented me from getting back to sleep.

Breakfast and the riders’ meeting ended up being total chaos this morning as well because the tour group who were also staying in the hotel seemed to need to eat at 0630 as well. 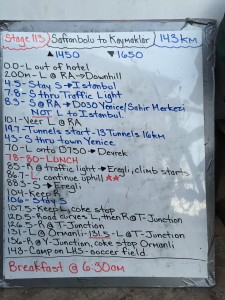 After photos with the hotel owner we eventually got out on the road with Michael, Ruth and I leaving together. We’d not gone far when Ruth realised that she’d forgotten her riding glasses – hopefully left in the hotel. Michael volunteered to go back and check, so Ruth and I continued on though I soon left her behind.

The morning ride was predominantly downhill following the river, and for a time we even had a tail wind – almost unheard of on this trip! It looks like they’re trying to set up dams, canals and power houses along this river as well, but given how low the water level in the river is I’m not sure how successful that’s going to end up being!

I was stopped at a police checkpoint just before the 70km turn – basically the guy was curious and wanted to know all the usuals; where are you from (ben Yeni Zealnda’lıyım), where are you going (ben Istanbul’da bisiklet ile gidiyorum), where have you come from (ben Beijing’da geliyorum – bir uç bin kilometre) – the net response is usually the same: we must be crazy to ride all that way!

Jordan had his frypan out at lunch and was making us toasted panini which were fantastic – a tomato/walnut pesto, fresh tomato and cheese all grilled to perfection – Jordan having broken his bike and taking up lunchtime cooking has been a very welcome change to tour lunches! 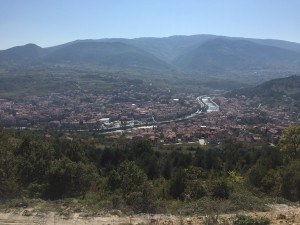 Climbing above the town of Devrek

The descent was fairly good fun with some nice flowing corners – the only issue was the width of the road which meant there was barely room for a bike to pass a car. The valley was very beautiful with its autumn colours beginning to show. 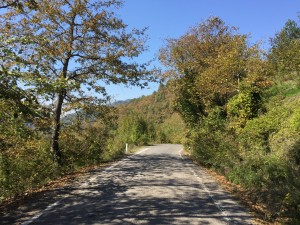 Autumn colours on the decent

As I continued the descent the distances, instructions, and reality didn’t really line up – there’s be corners that were noted but didn’t exist, there were corners that existed but weren’t in the notes, and pretty much none of them where at the distances noted. Mostly it didn’t matter, but there were a few places where it was somewhat confusing and it wasn’t until you could locate some flagging tape that you could be sure you were on the right track!

I’d planned to pick up a cool refreshing beverage to take to camp at the town at 136km but was foiled by the fact that they were both closed – maybe I’d arrived at prayers time, or perhaps Sunday afternoon isn’t an appropriate time for purchasing bira. 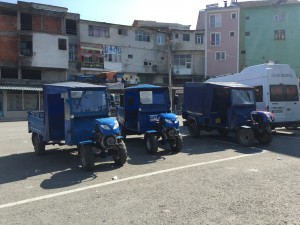 A popular form of local transport in the town carpark.

As I was on my way up the last hill the lunch truck pulled alongside me and Jordan updated me on the location of camp – it’s moved 4km closer, though given the vagaries of the distances and the route instructions today that could really mean anything!

As I got to the top of the hill and passed through the town I could see camp in the valley below but it took a while to find my way down. It’s a nice spot at the edge of a field with forest on two sides – I’ve cleared myself a spot under some trees and got my tent up.

Brian ran into issues this afternoon when he was chased by a dog and ended up falling of his bike damaging the bracket which holds his rear derailleur to hsi bike (the part I also broke on my bike way back in China). When Andres tried to straighten it so that he could ride it unfortunately broke (something which it’s designed to do to prevent damage to the bike frame).

Unfortunately Brian didn’t have a spare but back in camp and Andreas has managed to fashion a replacement from part of the steal shelving from the back of one of the vans – it’s not perfect, and he can’t use all of his gears but it does mean he has a functioning bike for the last three days.

Despite what I’d understood it sounds like there will be a convoy into Istanbul which could be a bit painful, but at least we will be riding all the way in!

Yesterday Mark had given us an empty create which we could put any drinks we wanted bring to camp into which meant that we were able to have a glass (plastic cup) of wine with our dinner this evening, and as I type I have a Raki digestive at my side – with only four days to go things are looking up – pity we couldn’t have had that crate from the outset!

It’s also a more pleasant temperature here this evening which has meant that we’ve been able to sit and chat for longer than usual – that said after a long hilly day people are tired and so at 1930 I’m the last one not to have headed to my tent.

Three days to go and the fact that the trip is going to end soon is starting to sink in. While I’m looking forward to getting home and back to the ‘real’ world I’m definitely going to miss the way things have been for the last five months. 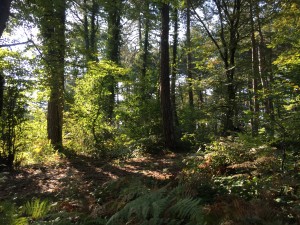 A pleasant forest view for tonight