I had a great sleep last night – it was cool and quiet where we were camped, at least through until 0535 when it was time for ‘us’ to get ready for Fajr prayer at which point it turned out that there must be mosques closer than it seemed. The local dogs also joined in too, howling at the call to prayer to make double sure that we were awake.

The dew was surprisingly heavy and my tent was as wet as if it had rained – given it was only 2ºC it made getting things packed up pretty chilly work. 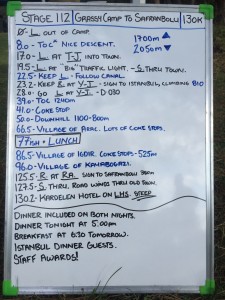 As has become my norm of recent weeks I was the last out of camp and though the route notes made it sound like we were climbing for the first 8km, the first thing we did was head down a reasonably long, reasonably steep hill at which point I discovered that it was even colder than I thought!

We did get to climb from just after 5km during which time I caught up with and passed several people before catching up with Michael and continuing to ride with him. We caught Rob just before Kastamonu (the town at 17km) and the three of us rode through town together, also finding Roger in the middle of town – he’d not seen any flagging tape for a while and was concerned that he was lost so was waiting for someone else to come along and confirm he was in the right place.

I also came very close to running into the back of a bus which decided to pull in right in front of us, thankfully Michael moved over far enough that with hard braking I could swing round the back corner without incident.

Out of town and the climbing for the day began in ernest so I left the others behind as I made my way up. It was still pretty cold and cloudy but with the climbing I was warming up – until it was time to head back down again at which point the combination of 8ºC and windchill had me frozen again!

Into lunch and Will and Jordan are cooking up a storm with omelettes and French toast on the menu. Grant was recently in, but Paul had decided to forgo lunch and continue on – these two seem to be having something of a competition to see who can be first into camp each day.

It had looked like we were going to ride out from under the cloud all morning and it finally cleared while I was at lunch which made for a much more pleasant afternoon. From lunch we were following the river gently down for much of the way. 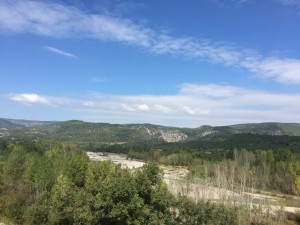 Autumn has arrived in Turkey 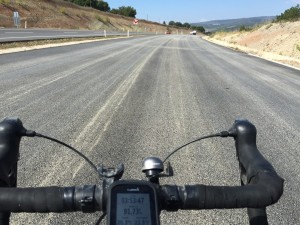 As seems to be usual there was a large, flash mosque in more-or-less the middle of nowhere – I don’t get where the money comes from to build these things, and who actually uses them. 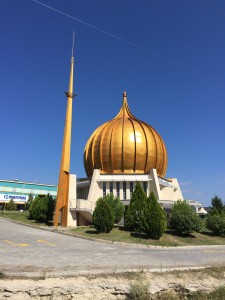 When we turned off the main road to head into Safranbolu there were only five kilometres to go, but that managed to include three pretty short, sharp climbs and several hundred metres of pretty rough cobblestones just to really finish us off!

Into the hotel and while I was waiting for permanent bags to have a shower I got my tent dried in the sun, then also got Michael’s and Ruth’s out for them as well. Through the afternoon we hug out in the hotel courtyard enjoying refreshing beverages from the store across the road whilst getting tents dried and things sorted. 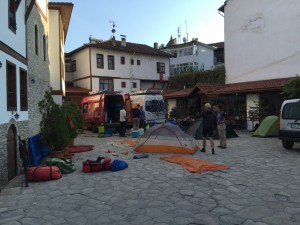 A couple of local lads found us and it turns out that empty Efes bottles are worth 25 kuruş (one quarter of a lira) each, so they had a relatively profitable afternoon waiting for us to finish a beer and then collecting the bottles up and taking them back to the store – kept them busy and meant the bottles got reused rather than ending up in the bin.

Dinner’s included with this hotel as well, though wasn’t quite a good as in Amasya – tasty enough but not very hot. Michael and I took a wander into the new part of town which is right near the hotel after dinner and managed to find rice pudding for dessert.

Despite only being three days long this week has been pretty tough going with relatively long days and a lot of climbing – much of it at seven to 10 percent, with some sections hitting 14% – so despite being in a hotel most of us were heading for bed by about 2100. 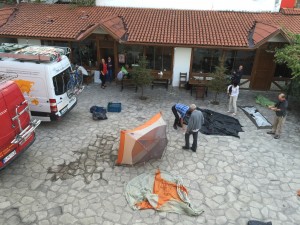 3 thoughts on “Heading for Safranbolu (stage 112)”