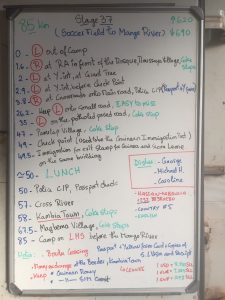 It did eventually cool down enough for sleeping last night but it took a while – I was glad there weren’t any mozies about (and there really weren’t this time) as it meant I could keep the sides of my tent open for some air movement.

I had my tent half under the tree last night and that side of it it was dry this morning, the other side which had been out in the open was wet as a fish – there’s a good tip for the future!

Today was broken into three stages – 35km of gravel, 15km of bad pavement to the border, then 35km of good pavement once we were in Sierra Leone.

The gravel turned out to be mostly a pretty good-quality gravel road, which meant that we were moving along pretty well, but it did mean it wasn’t anything like as much fun, but just as dusty.

I stopped at the village just up from camp which had decent 3G coverage to create my Off-grid in Guinea! post from my phone because I was pretty sure it was going to be another few days before I could get anything uploaded. Although that only took a few minutes it then took me about 15km to catch up with the usual suspects – though by that time they were all spread out and it was Canadian Kevin at the front.

The ‘Easy to miss’ turn was indeed easy to miss, and though we didn’t we expect that others will – it was interesting to see in the GPX track that the vehicle had also missed it – you could see where they had gone past, then reversed to take the corner.

The last stretch of gravel down to the main road was pretty crazy-rough – mind you the first 5km of the pavement wasn’t that much better, and the decent graded gravel road had been much smoother to ride on.

Sooner than expected the road improved, and the last 10km were actually really good which meant that we were soon pulling in to the first of the checkpoints before the border – Kevin got there slightly ahead of me and was being asked for a bribe when I rolled in – that got laughed off and we continued on.

At the border post itself Hassan was all business and no-sooner had we put our bikes down than he was hustling us in to the immigration building. Getting out of Guinea was relatively simple though we were the first two riders through and we got the definite sense that the border official was going to become less cooperative as the rest of us rolled in.

Both the Guinea exit and the Sierra Leone entrance are in the same corridor of the same building which makes the whole process a lot simpler, though the change was quite marked if for no other reason than for the first time in the tour the local language is English and we knew exactly what was going on!

Thankfully the health officials didn’t want to take my temperature – though it was still reasonably cool the humidity was incredibly high so after 50km of fairly hard riding and being rushed straight in I was seriously hot and sweaty.

We were ushered in to the office of the head of immigration, and though bid to take a seat I elected to stand – it was even hotter in there and and I was at the point that the sweat was dripping off my fingers and making puddles on the floor under my feet. To make things worse after the gravel road my legs were dusty, so not only puddles, but muddy puddles to boot! 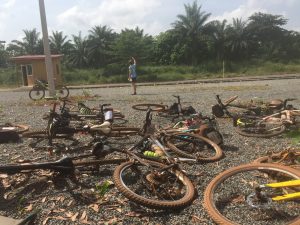 Bikes at the border

My worst fear was that the guy would want to shake hands – fortunately that didn’t happen, so as soon as my details were entered in ‘the big book of tourists’ and my passport stamped I beat a hasty retreat to the relative cool of the tree the lunch truck was under.

And just like that, although still sitting under a Guinean tree, I was officially in Sierra Leone – these border crossings seem to be getting easier as we go along – long may that continue!

Because we were the first in the crew were still busy getting lunch sorted – there was also no hurry as we had to wait for the dinner truck to be across the border before we were able to continue in case the customs officials wanted to inspect bags.

After lunch and while we were waiting the expected money changers turned up. Max had mentioned that when we come back into Guinea we do so at a very small village, so I took the precaution of changing €20 into Guinean currency as I was almost out, as well as changing €100 into Sierra Leone Leones – interestingly for the first time on tour the rate offered at the border was actually better for USD than it was for EUR, something I hadn’t expected so I didn’t have any $$ with me.

All the riders were in by the time the formalities for the dinner truck were completed and it started to move through the series of ropes which is all that actually prevents anyone from crossing the border. A number of us who had been waiting for a while – Kevin and I had been there almost two hours at that point – formed up behind them as they made their way through.

It seemed that they were done as they approached the last rope, so as it was downhill from there we went round them and headed off – 500m later when I looked back they were still there, seemingly stalled at the last hurdle.

Kevin and I stopped and watched for a while, but there was no movement, so I headed back to make sure we were allowed to keep going – I didn’t feel like riding another 40km just because we had to go back for some stupid formality.

Back at the truck the officials were giving Noah a hard time, but Colleen assured me that we were free to go, and it was just the fact that the truck was a right-hand-drive that was causing this round of border issue.

Kevin saw me coming back, so headed off and we caught up with Australian Kevin and Caroline a short while later.

In Kambia we located what looked like the Orange agent, but he couldn’t provide a SIM card, only recharge, so he sent us back down the road. The next place we found was more helpful – they didn’t have SIM cards, but could call someone who did – he’d be here in five minutes. And so he was.

A bit of mucking round later and the three of us had working SIM cards – so much for needing ID documentation, but at least it was working. We saw a number of other riders passing who also called in to get SIM cards, so it was worth their effort making the call. 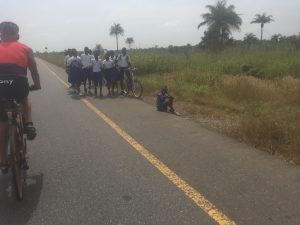 We stopped a bit further up the road for a ‘coke’ which for the first time in a while was actually coke, and actually cold!

Though Sierra Leone’s officially English speaking, we still seem to be Portos here, and are met just as enthusiastically by the children on the side of the road as we had been in Guinea. It’s also an interesting ‘hybrid’ version of English, which at times you really have to listen to in order to understand what’s going on.

Camp was supposed to be just before the bridge, but there was a broken down truck where we had expected it to be, so carried on to discover there were two bridges and we were just before the second. There’s a police checkpoint here and we’re camping in the compound that the soldiers who man the checkpoint live in.

I found a shady spot and got my tent up before taking myself and my bike down to the river to wash both. It was a significantly larger river than I’d expected! 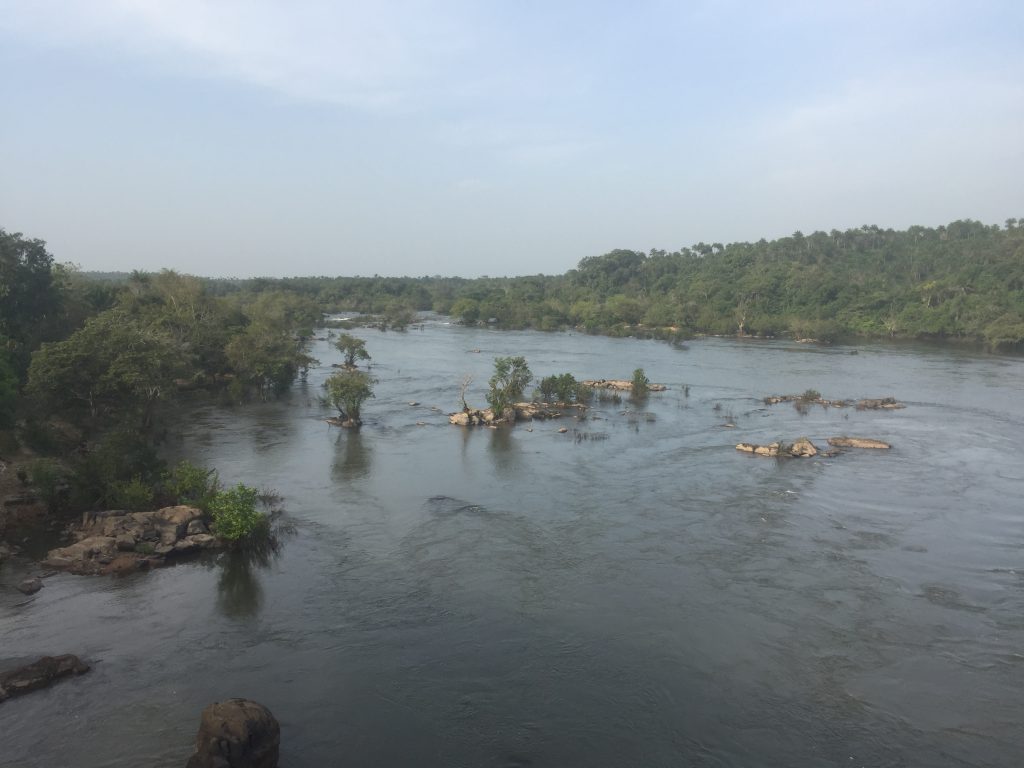 The water temperature was perfect and as well as getting our bikes, clothing and bodies clean we enjoyed just sitting in the river and cooling down! 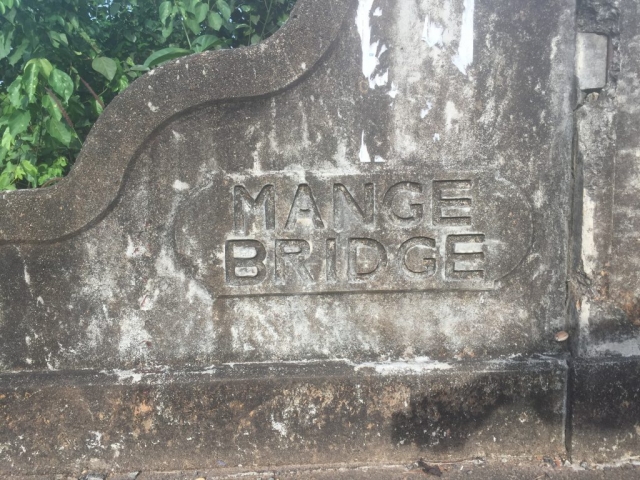 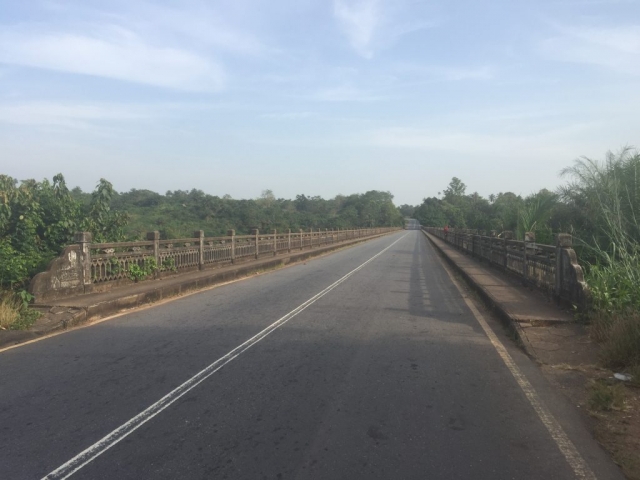 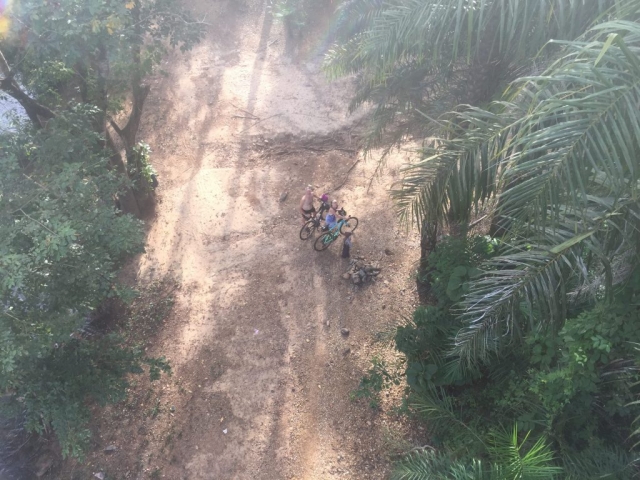 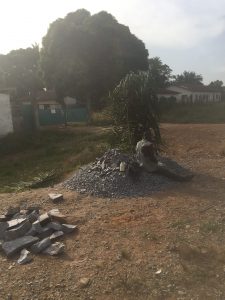 As I was heading to the river I’d noticed a couple of guys sitting in the shade of some foliage – initially I wasn’t sure what they were doing but on my return trip I figured it out – they’d hauled slabs of rock up from the river and were breaking them into gravel! A hot hard way to make any sort of living.

Back in to camp and another enterprising local had heard that there were thirsty tourists in town and had arrived with a few cold drinks. Brian asked if she had beer – sure I’ll bring some. A few minutes later she returned with four.

Good start says Brian – I reckon if you bring 40 you’ll sell them all. Fifteen minutes later a scooter turns up with a crate of beer, a sack of ice blocks and a chilly bin – pretty soon they had a good business going and the scooter was kept busy going back and forth to the source to keep the chilly bin stocked.

It hadn’t seemed so hot when we first got in to camp, but by the time dinner was ready both the heat and the humidity seemed to have increased significantly.

Riders’ meeting and the plans for tomorrow became a bit clearer – we have 100km to ride to the end of the peninsula opposite Freetown. There’s a ferry there which will take riders, the lunch truck and the Hiluxes across, but the ramp is too steep for the dinner truck, so it has to go round.

The ferry runs at 0800, 1100 and 1500. There are also local speedboats which can potentially take riders and their bikes across, but the Kevins and I are thinking that we need to be on the road as soon as possible tomorrow with the objective to be at the dock in time for the 1100 ferry – it’s potentially ambitious but seems like a good way not to end up sitting round for several hours at a ferry terminal.

Errol and the crew had been busy during the afternoon so we had burgers and fried potatoes for dinner – very tasty it was too.

It was still pretty hot, so I spent a while chatting before heading off to my tent to see about some sleep! 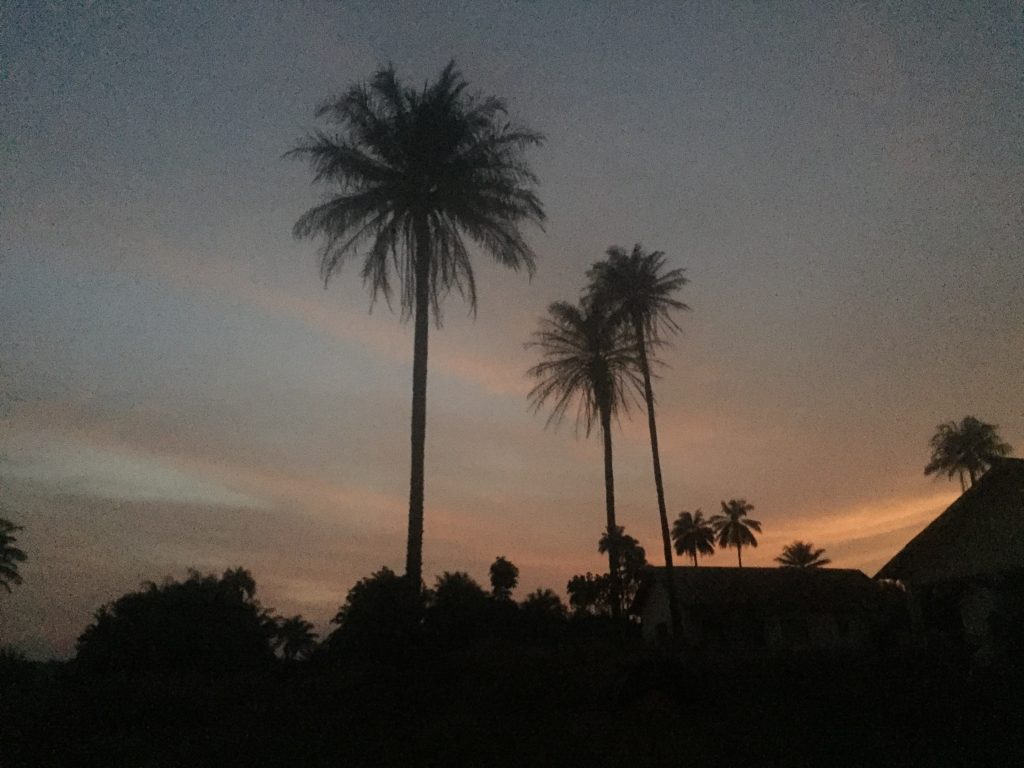 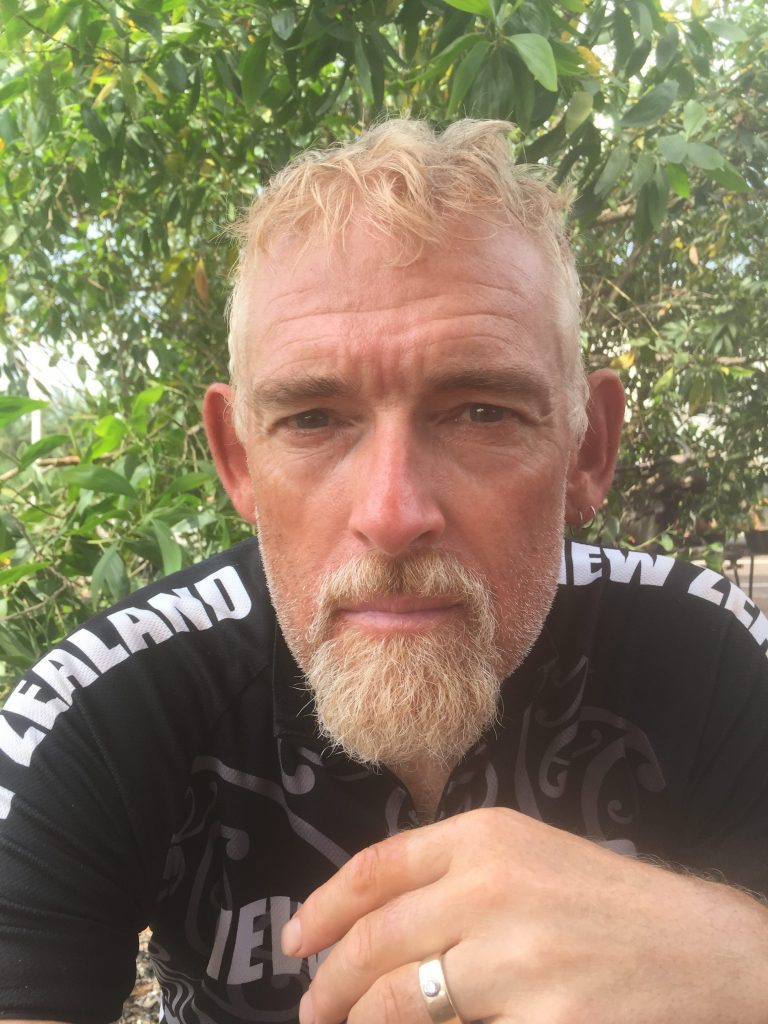 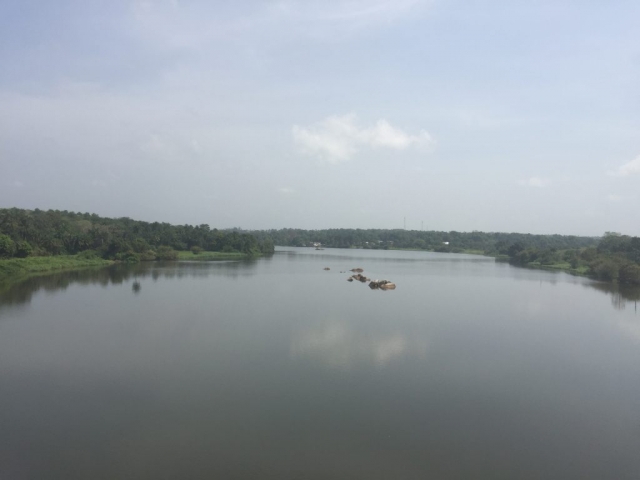 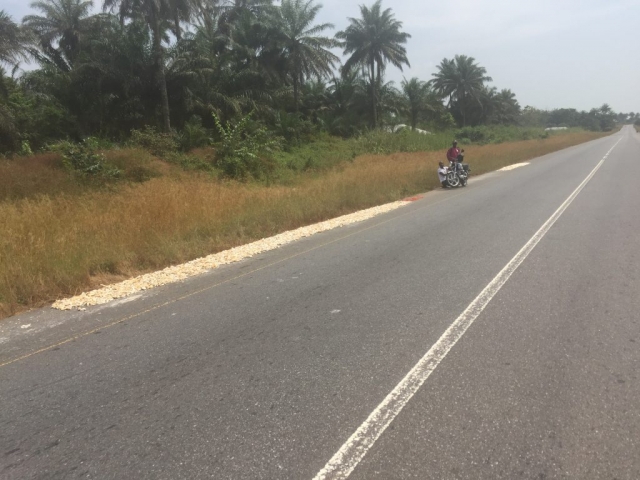 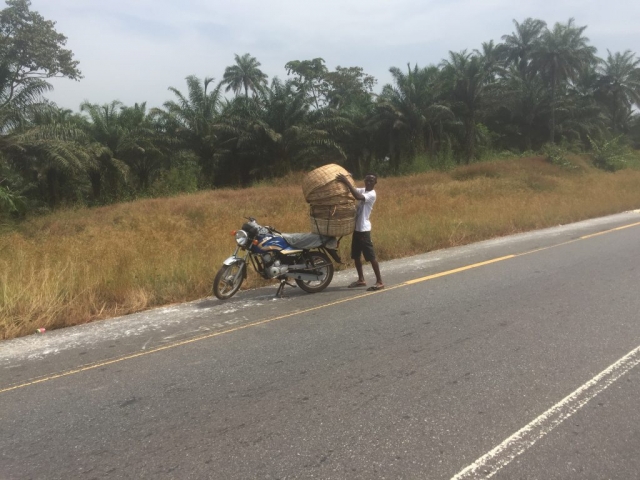 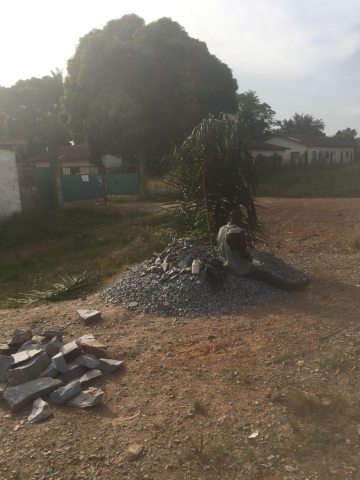