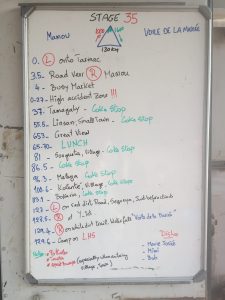 Even colder last night than it had been the previous night – 8 degrees under my very, very wet fly – the drop in temperature overnight meant the water had to go somewhere, and a lot of that was on my tent, inside and out!

We backtracked to the tarmac, then turned left to get back on the main road and made our way into town which was already pretty busy which given how early it was was somewhat surprising.

As we got to the edge of town we passed under the start arch for the Tour de Guinea. 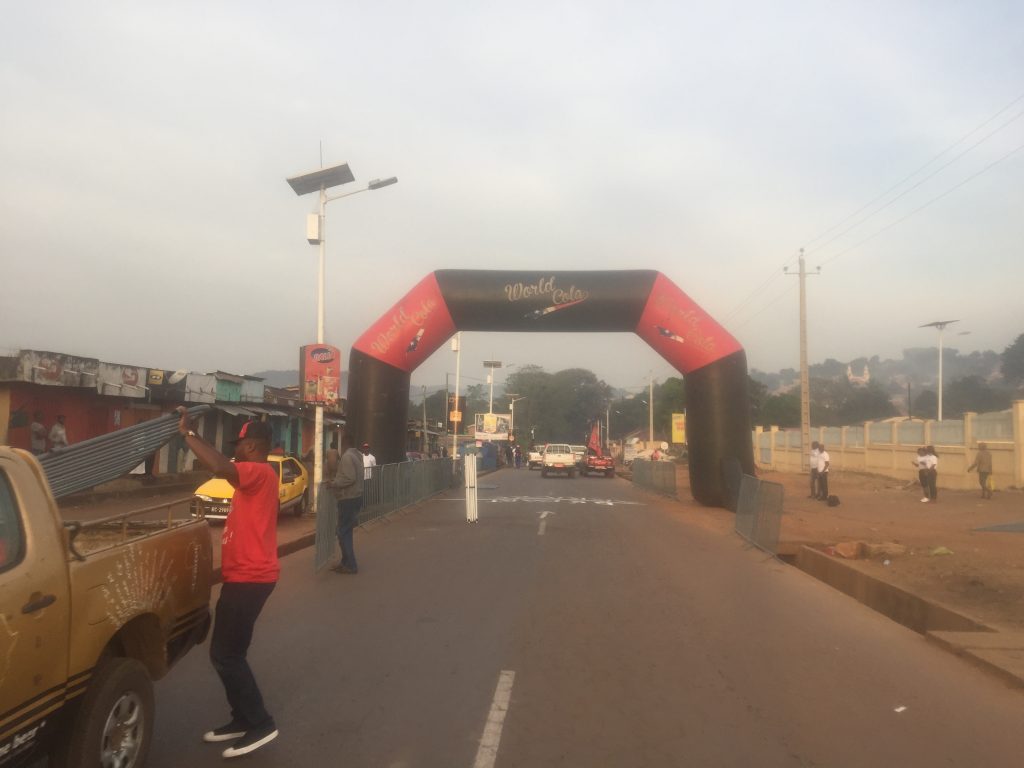 Again this meant that the road was closed behind us which significantly reduced the amount of traffic and luckily Sharita’s warning of how dangerous the first 27km was going to be didn’t materialise as a result.

As soon as we left town we began climbing which lasted for over 5km during which time I passed most of the riders who had set off before us. The payback came with a great descent!

Through the morning I was riding on my own and when I got to lunch I discovered that I was the first rider in – that certainly explained the response I was getting from the people in the villages as I passed – they clearly thought I was in the Tour de Guinea and leading the race, so lots of cheering, clapping, shouting, waving, yelling, and people pushing in all around!

Marie-Josée who was riding with a small group of our riders had a similar experience with lots of people yelling to her that she was the first woman, and that she was in sixth place and, “allez, allez, allez”.

I was somewhat surprised that the actual tour riders didn’t catch me before I got to lunch, but I’d not been there long when we saw the leading vehicles start to come past.

Yesterday when the peloton passed they weren’t going very quickly, today they were split into a number of groups, and flying! Here are a couple of videos of the first and second groups coming past us.

Back on the road from lunch and although it’s only 1030 it’s already over thirty degrees and the lower altitudes have resulted in significantly increased humidity so it’s feeling hotter still.

There were a couple of good climbs in the afternoon, but in general we were heading down which always makes things go by more quickly.

As the afternoon progressed we started to see some impressive rock out-crops to the right. 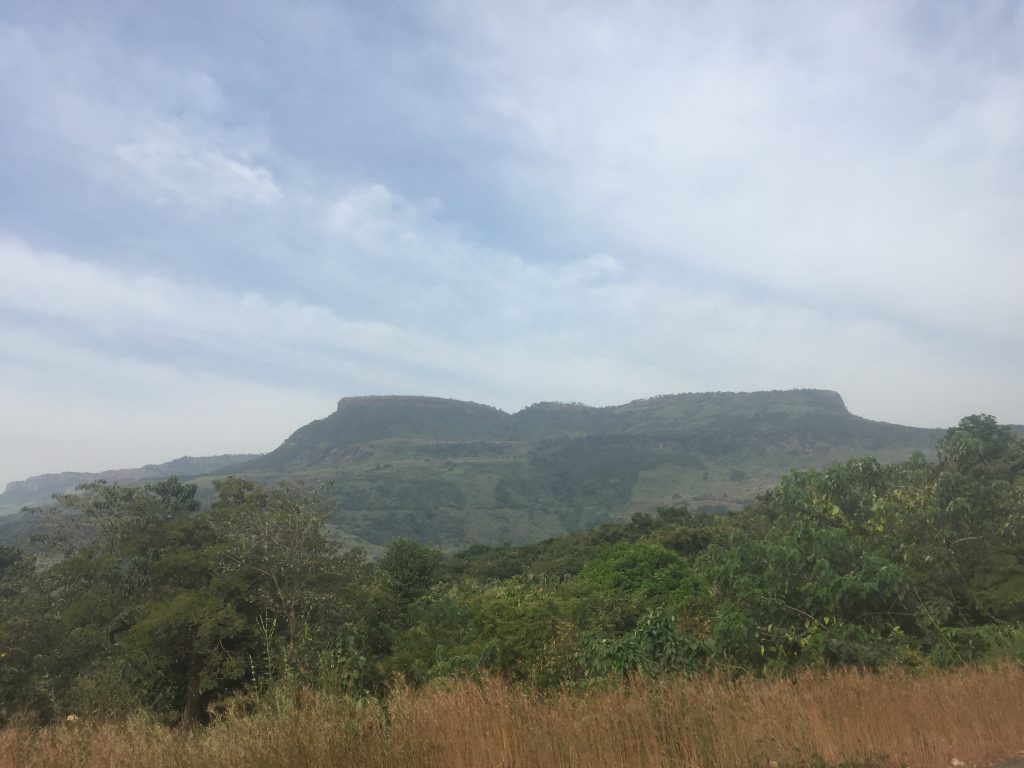 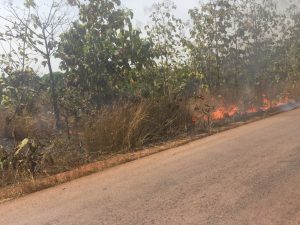 Fire is still very much part of the agricultural practice in Guinea, and at one stage I came pasty an area where the undergrowth was being burnt out beside the road – it also explains why things tend to look pretty hazy when looking into the distance.

The last 20km got pretty manic – presumably the traffic had been being held up by the Tour de Guinea and had been ‘released’ resulting in frustrated drivers driving like complete maniacs towards us – overtaking where there wasn’t room and forcing us off the side of the road.

It was something of a relief to turn off the main road and on to the gravel for the last stretch – although it was pretty rough, at least there wasn’t any traffic! 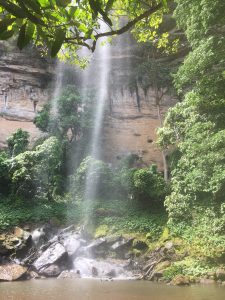 Tonight’s camp is an awesome spot beside a waterfall and under the largest bamboo plant I think I’ve ever seen!

As I was coming in the dinner truck was just getting itself into position – they’d had to reverse over 1.2km from the road to the waterfall as there was nowhere they could turn around, and it was a narrow track with lots of overhanging trees.

A few of us helped to carry kitchen equipment, food, water, gas tanks, chairs etc from the closest point they could get the truck to somewhere flat the kitchen could be set up.

Next stop was under the waterfall – I wandered in still in my riding kit and stood under the water coming down – that got both my clothing and me significantly cleaner and cooler.

It’s amazing how much difference the falling water makes to the temperature – out on the road it was 38 degrees, in here under the shade of the giant bamboo and beside the waterfall it’s 28 and feels significantly cooler. 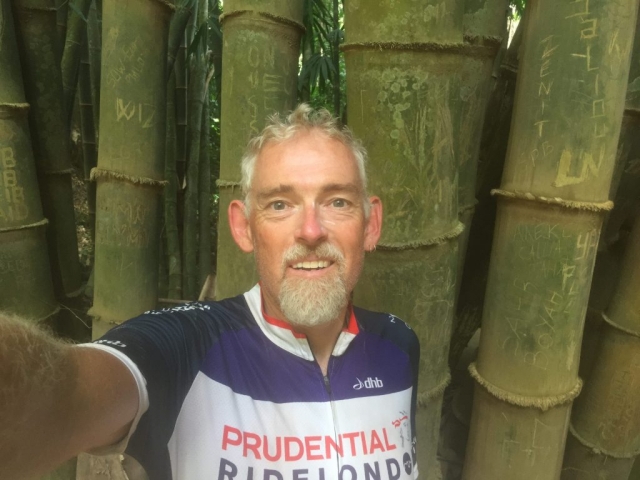 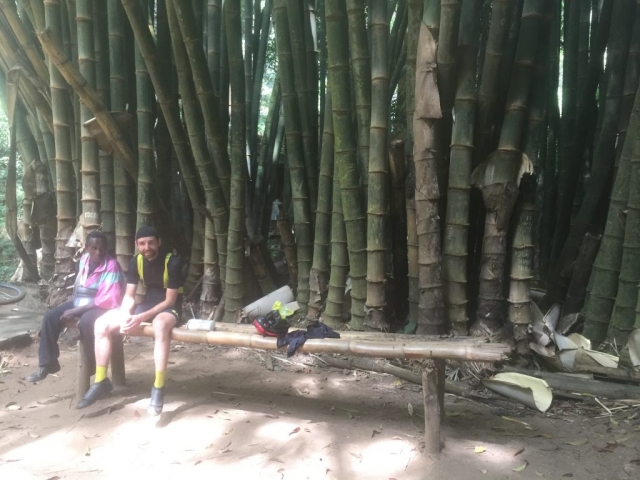 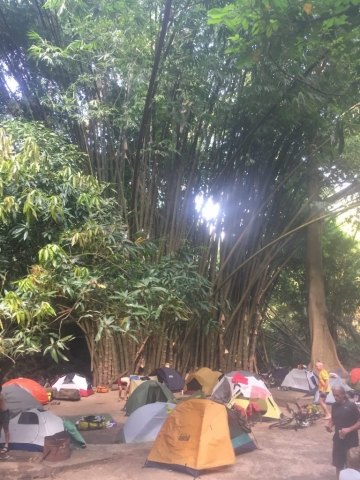 I found a spot well in the shade and started to get my tent up – first stop was to string a line to get my groundsheet and tent dry. That took all of five minutes – it’s cooler, but still pretty warm in here!

Tent up, a proper wash, and it was time for a left-over beer from Paul’s birthday celebrations last night – amazingly the beers were still cold which was very welcome – there’s also still wine which looks like it’s going to last till dinner.

The waterfall’s also popular with the locals and a large group of university students from the nearby town came to visit. The men stripped down to their boxers, and went in the waterfall which lead to the quote of the day:

The bodies – suddenly I’m not so cool here!

It was interesting to see that the women in the group didn’t initially go in, but once they’d seen a number of the female TDA riders in their togs / underwear going in some of them also joined in.

The next group of visitors to the waterfall are all nurses from around the world who are here in Guinea with a project called Mercy Ships. 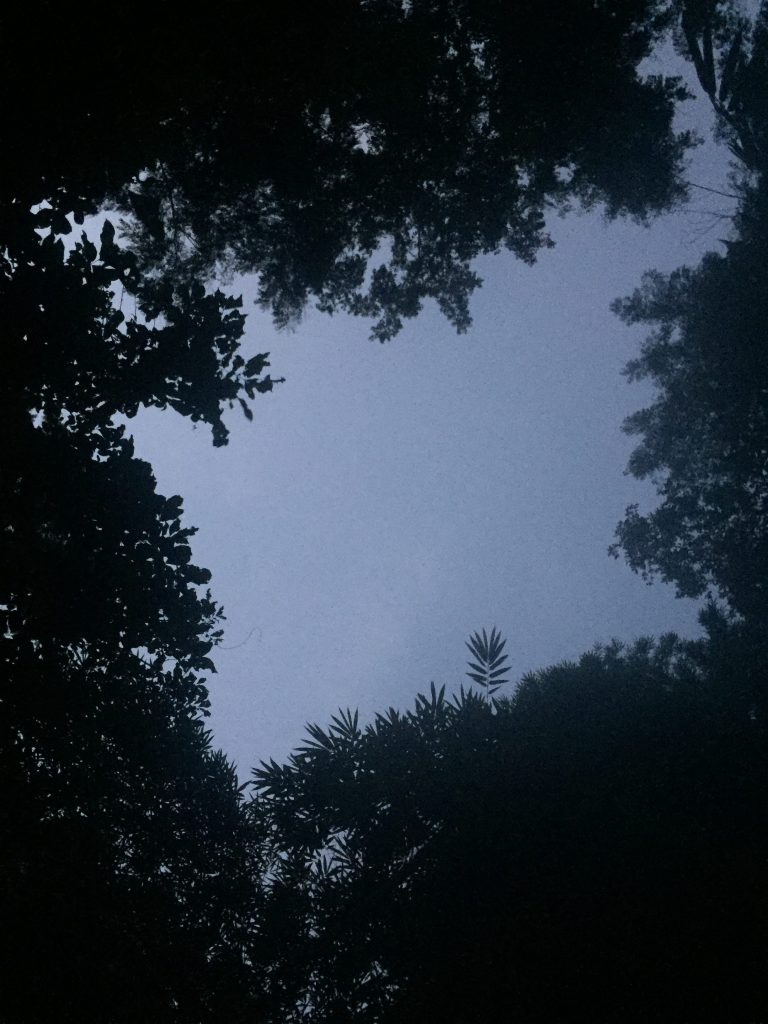 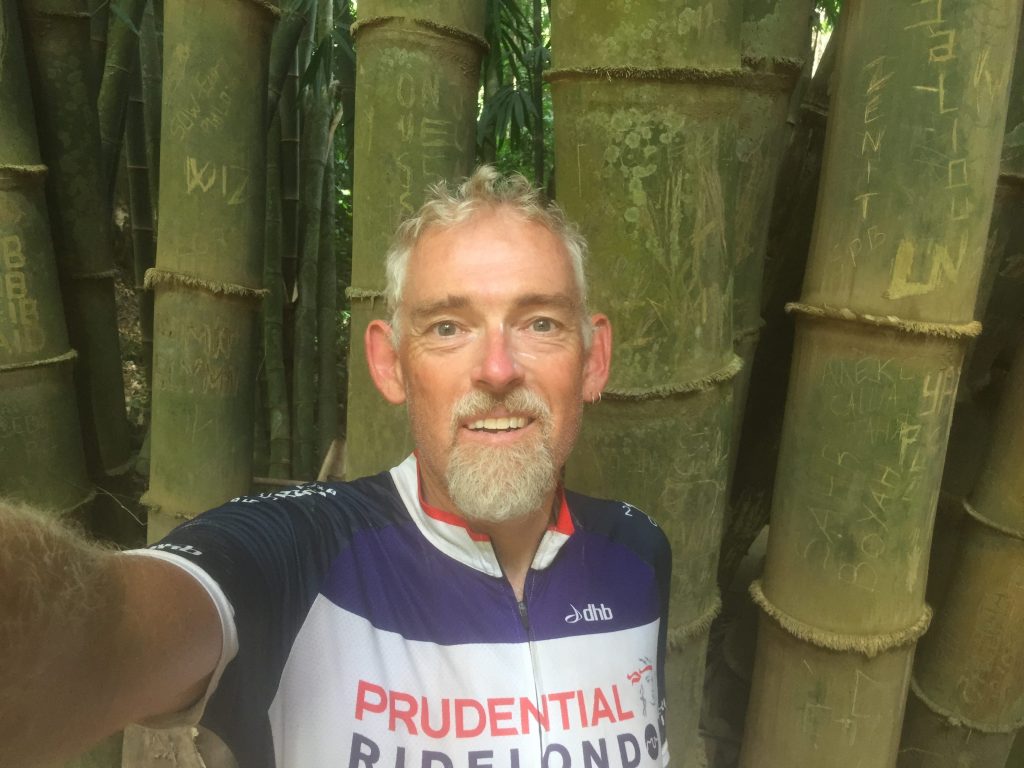 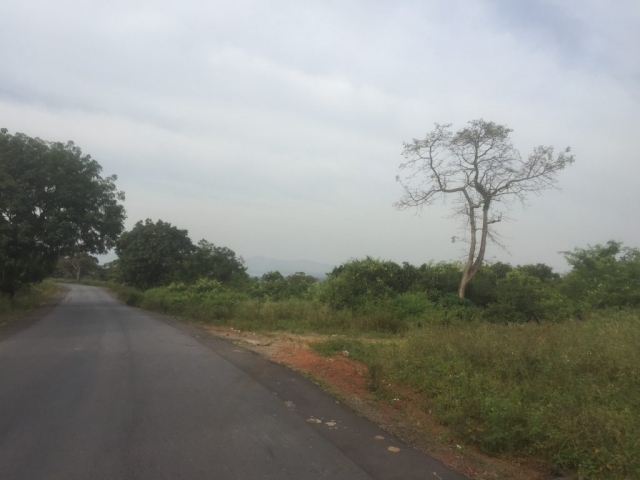 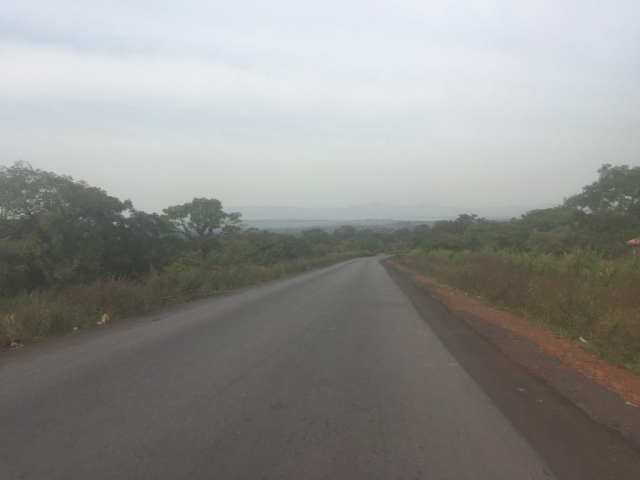 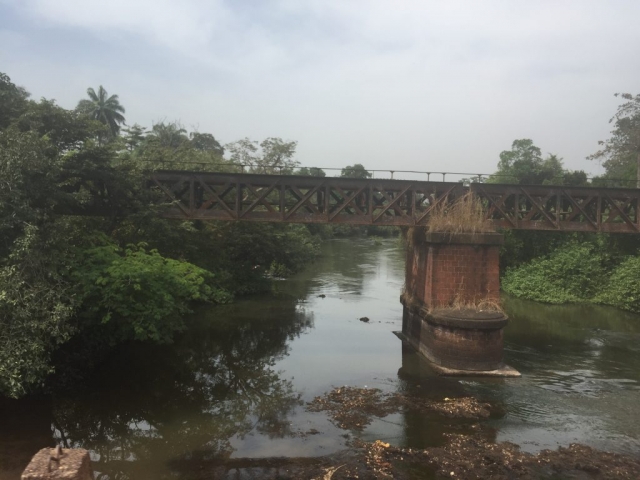 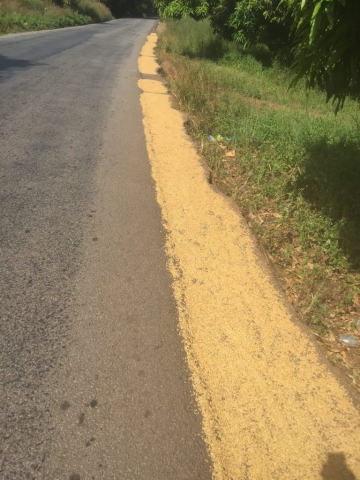 One thought on “Everyone loves a waterfall (Actually stage 35)”