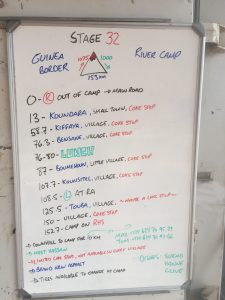 So this seemed like it was going to be such a good spot right up until the point they started the generator just as we were getting ready for bed. The noise was one thing, but the real problem was that we were inside a fully walled compound, as was the exhaust from the generator and when we were in our tents at ground level the exhaust was coming right in!

A couple of people tried to get them to shut it down, and eventually they did but that was a couple of very unpleasant hours later. I also made a significant error in that process – in try to keep the fumes and air moving in my tent I’d left the doors slightly unzipped – I wasn’t too bothered as there didn’t seem to be any mozzies about.

I woke up just before 0100 and discovered I was seriously wrong about the mozzies. In the end I killed so many trying to get rid of them – leaving bloody smears on the sides of my tent – that I lost count in excess of 15! I spent the next hour half-awake, half-asleep dreaming that I was already dying from Malaria!

Then there was the ‘call to prayer’ which seemed to run all night in honour of Mohamed’s birthday and to top off probably the worst night’s sleep of the trip the rooster at the back of the compound let loose just before 0500.

Everyone was ready for coffee by the time it arrived and we were on the road as soon as breakfast was done – we had a long way to go and on little sleep wanted to get on the road before the heat. 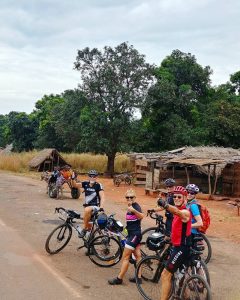 The usual suspects set off joined by Caroline and Hanne this morning and we were making great time sitting at just under 30 km/h with little breeze to make any much difference.

We took a break at around 40km, and then again at one of the ‘coke stops’, though we didn’t have any luck finding any coke – or anything else for that matter! The dinner truck came past while we were stopped, and Sophie snapped the photo at left which she later shared on FaceBook with the caption “Guinea coke stops… Not cold, not coke #tdawestafrica” which summed things up well 🙂

There have been lots of enthusiastic groups of children out on the road cheering us on and I tried to make a video of one of the groups – the road noise rather drowns out the children, but you get the idea.

The two main industries we’ve seen this morning seem to be firewood and lattice fence panels. 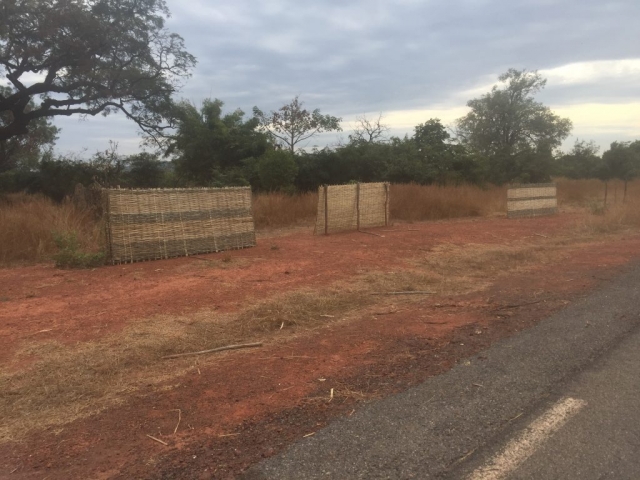 In to lunch and it was still reasonably early, and reasonably cool, but in the half hour we were there the temperature really started to climb such that by the time we set off again it was over 30 and the humidity was also heading upwards.

Back on the road and Canadian Kevin and I soon pulled ahead of the others in our group. We knew there was lots of climbing ahead and that it was going to get hot, so he elected to refill his water bottle as we passed Sharita who had stopped to help Dominic with a flat tyre.

I’d expected him to catch me as the afternoon continued, but in the end I didn’t seem him again until camp. I stopped at the 107km coke stop for some water just as Paul was leaving. I passed him and then Mimi and Dave a short time later.

As usual I really enjoyed the hills, particularly after the last 2,500km which have been all essentially flat. I also enjoyed riding on my own for the first time in a while – when there are hill at play riding in a group is much harder to sustain because people climb at such different rates – particularly with the huge range of gearing – my lowest gear is about half way through the range others have which means I actually have to go faster, otherwise I’d stop, while they can continue to spin at lower speeds with their lower gears.

The board had said the last 10km were down hill and with one tiny exception that proved to be true. The first couple of those kilometres were pretty steep as well which really made things fly. I saw Max heading back up to provide refreshments to those still on the road, but I was so close to camp and going well so gave him the thumbs up and continued on down.

In to camp a little ahead of the planned location and I was met by Hassan and a large group of children with flagging-tape headbands waiting for me on the roadside. 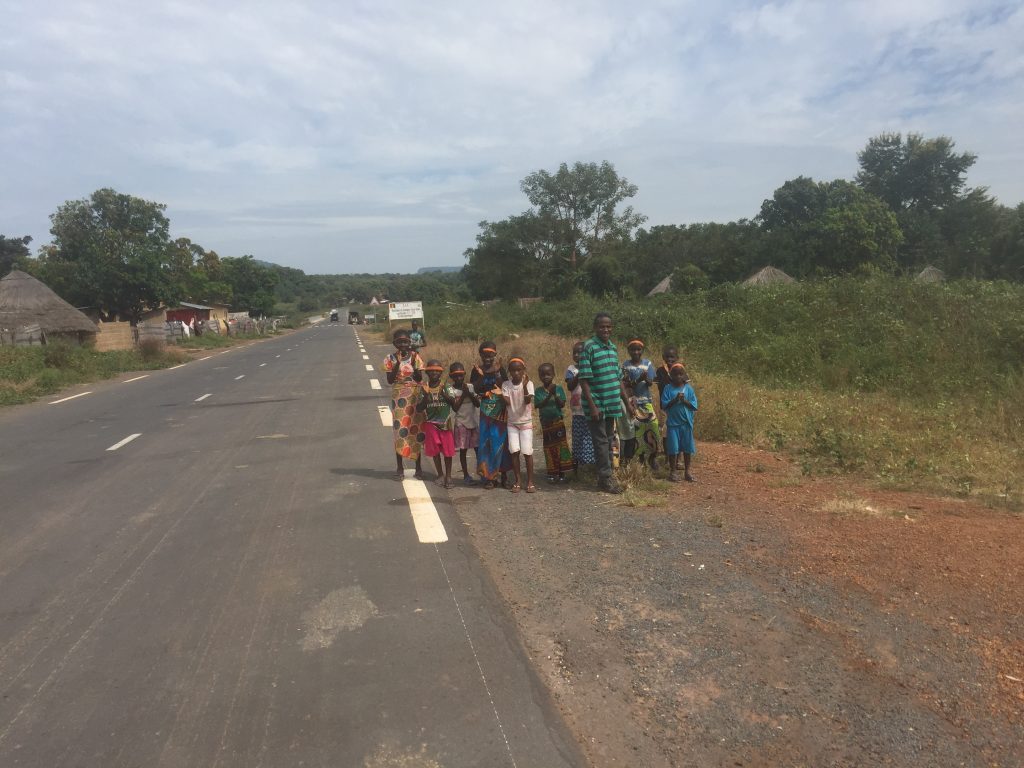 This new campsite is a great spot, with grass, shade, and even a river near by – all of which sounds much better than the gravel ex-road-building yard that Max had told us about last night.

I got my tent up, then went looking for the river – given the water courses we’ve seen recently this one is huge! 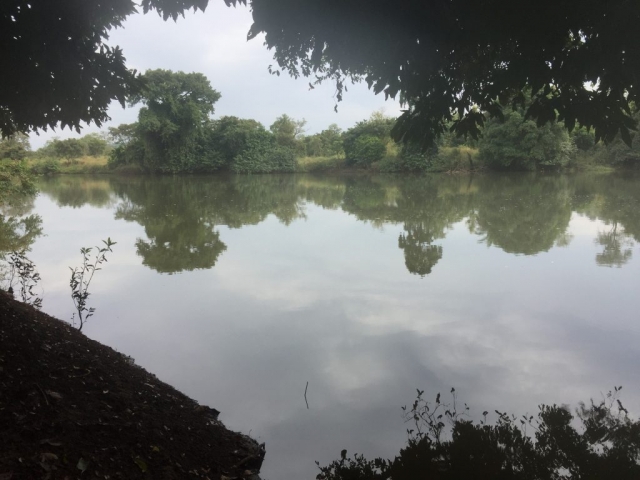 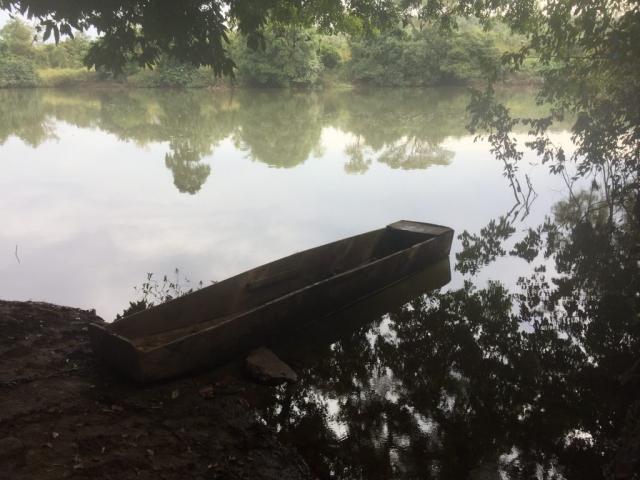 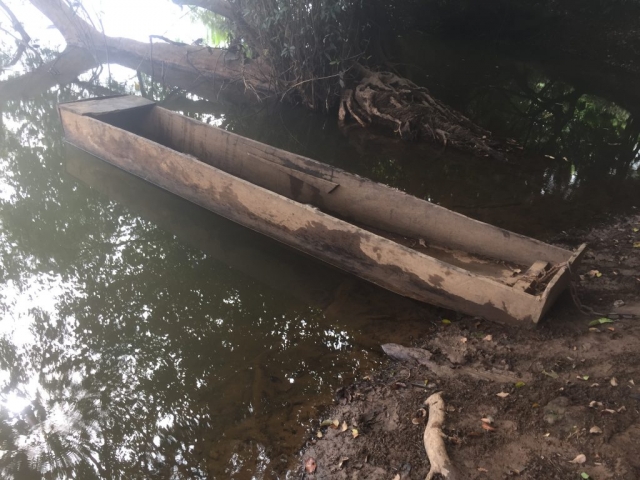 A few others were already in the river and reported that it was cool and refreshing so I joined them, still in my sweaty cycling kit – it was indeed fantastic. As well as being wide, it’s also very deep – within 2m of the bank it was well over my head in depth.

Back to camp and I used my 2 litres of bottle shower water to rinse off from the river and wash out my cycling clothes. From there it was a matter of trying to stay cool and to rehydrate after such a hot afternoon.

Unfortunately for Australian Kevin the flagging tape for the new camp had all been turned into headbands for the children and he missed the turn in, continuing on to a point beyond where we were supposed to have been camped before turning back – someone had seen him miss the turn in, so the lunch truck went looking and found him heading back about a kilometre from camp. Lezinda said she could put his bike on the van, but he was having none of that and rode back!

BBQ dinner tonight and this time it was pork chops – by far the best BBQ we’ve had, they were super tasty and very welcome after the hills of the day. Tomorrow is Marie-Josée’s birthday, while the 23rd is Pauls, so there was birthday cake – cooked in dutch ovens over coals – for dessert.

I went back to my tent just as dinner was finishing to get head torch and discovered that the very welcome drop in temperature had resulted in an already very heavy dew forming – the clothing I’d hung on my tent was wetter now than it had been half an hour before. I pulled everything in and put my fly on my tent to keep things dry.

Mateo had gifted a bottle of wine to Canadian Kevin when he left and Kevin was ready for it not to be in his bag so we wandered back over to his tent and we made relatively short work of that before heading for bed with high hopes for a much better night’s sleep tonight. 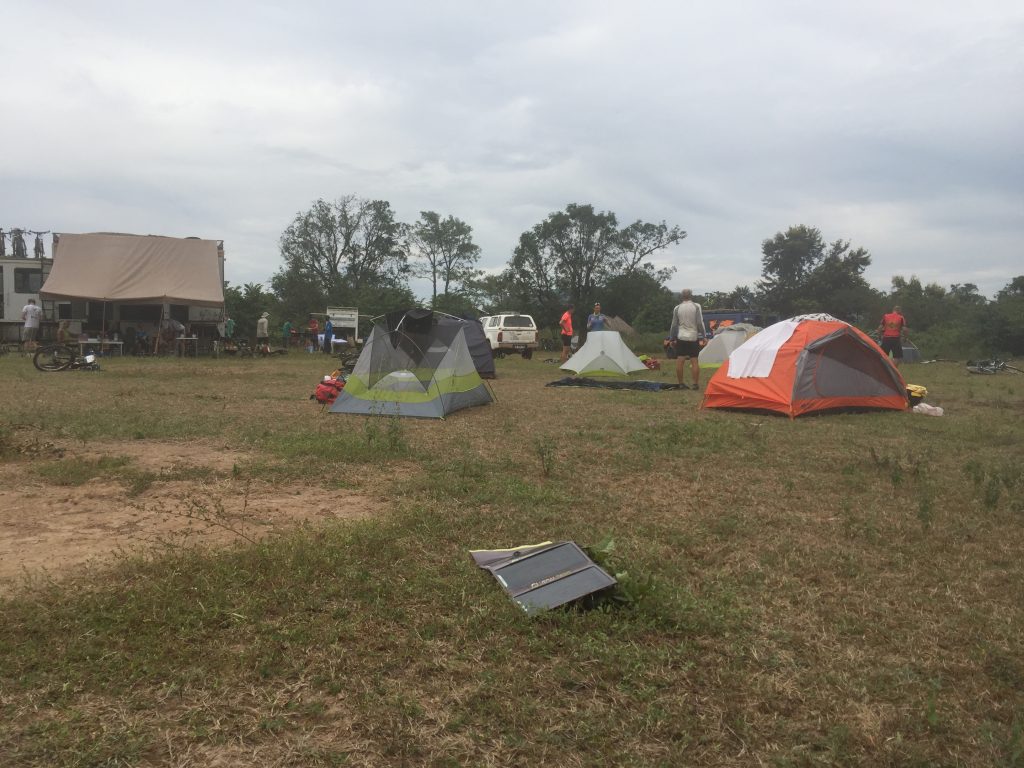 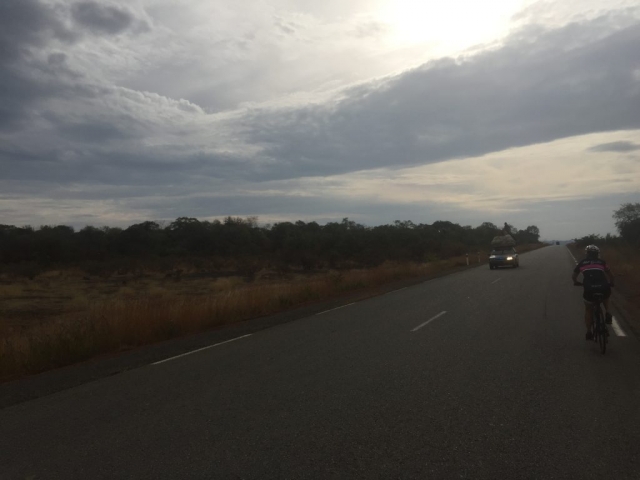 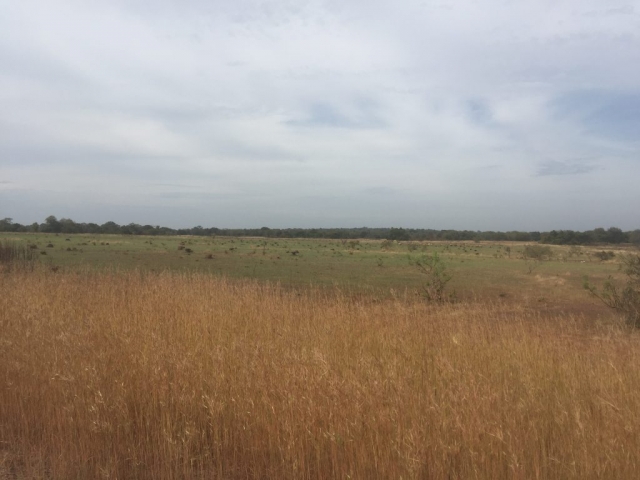 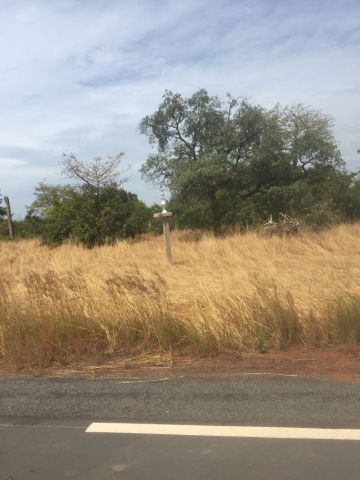 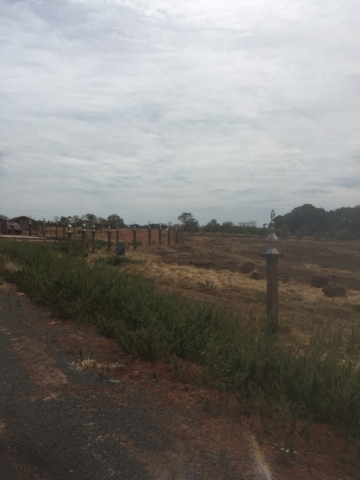 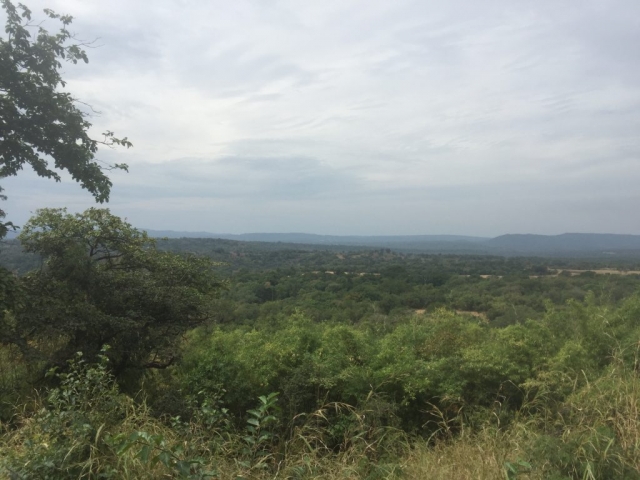 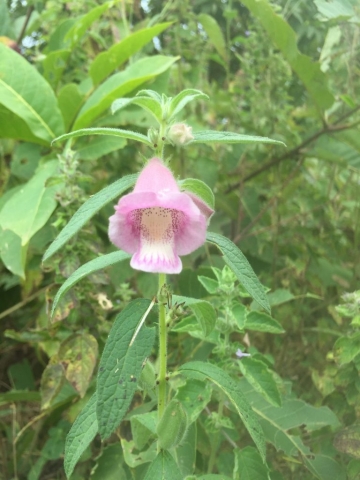 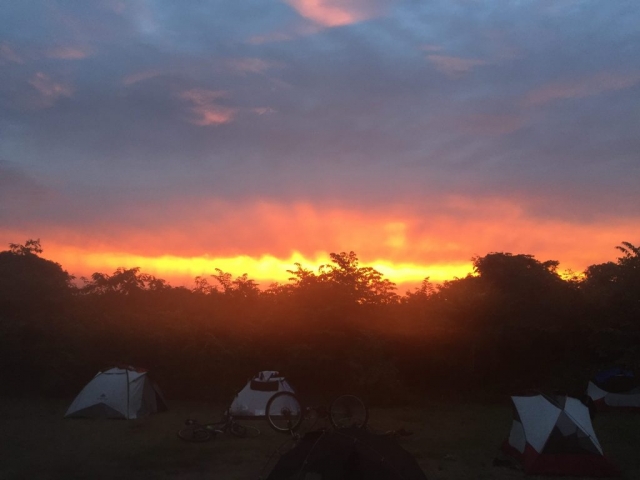