Such a fantastic sleep last night – it was cool, it was quiet, it was dark, even a little rain on the roof at times – oh so much better than last night at disco hotel! 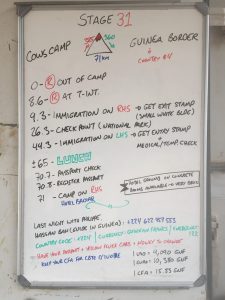 Today was a pretty easy riding day, but with the crossing into Guinea anything could happen as far as time went, so it was the usual schedule this morning.

A few more spits of rain as we were having breakfast, but even then it was over 20 degrees so it was actually quite pleasant – Paul put his raincoat on for about 3 minutes but was soon overheating and took it off again.

The 9km to the Senegalese immigration went by quickly and easily and we were soon joining the line of rider’s who had left before us to check out of Senegal.

Sharita was in the office and keeping them organised – one of the border staff was trying to group us by country of nationality, but Sharita was having none of that and simply ignoring him, collecting our passports four at a time, at which point we moved from the ‘to do’ queue to the ‘work in progress’ queue. A couple of minutes later she handed back our passport and we collected our bike and moved on.

While we were there a bunch of money changers turned up, but they were offering such a crazy-low rate that we simply laughed and moved on. I wandered up the road to be out of the way while I waited for the Kevins and Hanne to get their passports stamped.

Even though we’d checked out of Senegal we were still technically in the country – from immigration to the actual border is simply a really long way – over 30km. Pretty much the entire way is through a national park.

According to Robert’s map the park includes elephants, lions, leopards and all manner of FBT (furry brown thing), and while the countryside was lush and interesting we saw only a few troops of monkeys (or maybe baboons, opinion was divided) but getting a photo of them was super hard as they seem pretty human-shy and move fast! 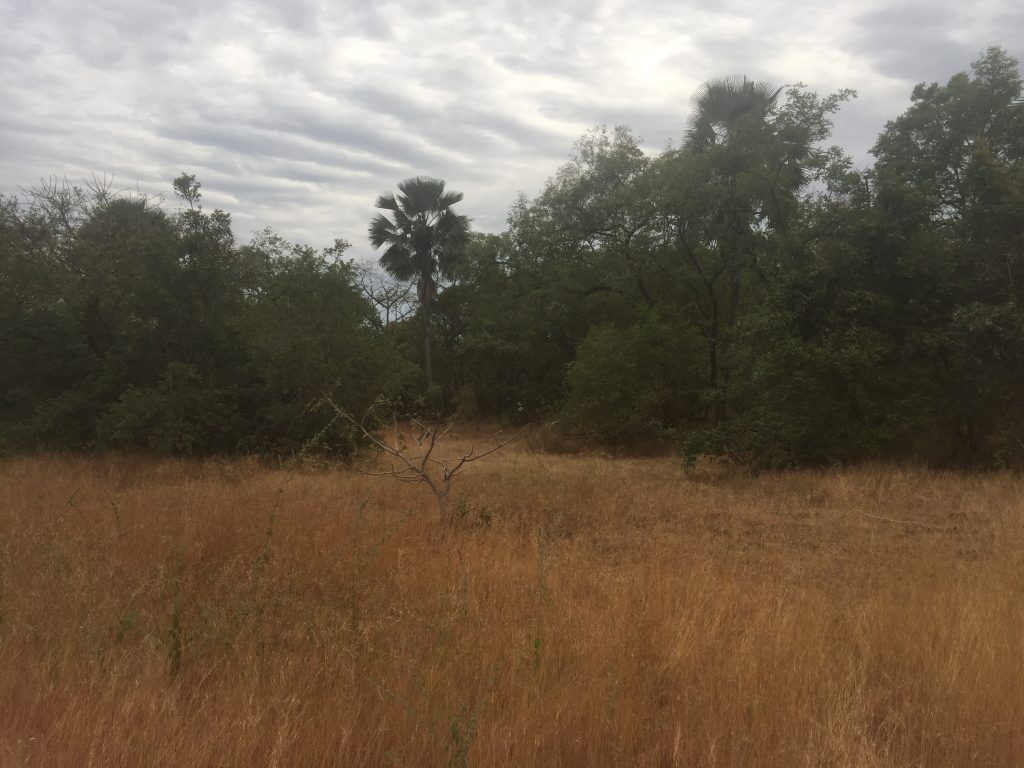 There’s a baboon up that termite mound – promise!

Obviously relations between Senegal and Guinea have been better in the past – there’s a huge border facility which is basically completely abandoned at the actual border instead of the two sets of dusty huts currently being used in each country.

Up to the Guinea border point and we parked our bikes under Sophie’s care. First up were some random questions – where we we from, how old are we, and are we married – answers handwritten on a paper form. Answers on the back of a postcard as to what happens to those forms at the end of each day.

Next stop we needed to get our passports scanned – it seems that Canada paid a bunch of money to help Guinea automate it’s immigration and customs systems, which is all well and good but it rather relies on electricity! We handed in our passports and were sitting waiting as instructed, but were then moved back outside to wait – to be honest it was cooler, and more interesting, out there.

Jacquie asked one of the officials where we could change money – he wandered off and a short time later someone turned up to change money. Again his opening rates were incredibly low – Dominic pointed out to him that there were many of us all wanting to change money and if he offered a good rate he would get a lot of business.

Initially that logic didn’t seem to work, but word must have got round that there was a large group of westerners in town and before long there were about five guys all offering good rates in order to get our business – thank goodness for competition!

A guy also turned up offering SIM cards, but nobody could figure our how to get any data, and he didn’t really understand what we were asking – even when the French-speakers in our group tried to figure things out, so though I changed some money, I passed on the SIM cards at that point.

Not long after I was called in to have my passport scanned, my occupation entered into the computer, and the entry stamp applied to my passport. Apparently they didn’t care about a health check, or our yellow fever certificates today so after a short while we were free to go! 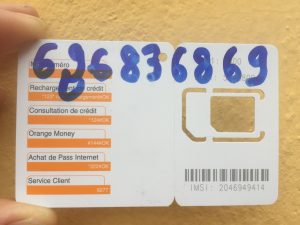 We’d planned to get a drink at a ‘store’ we could see just after the rope (no gates or barriers here, just a rope across the road) but there was no electricity so everything was luke warm so we declined.

What the lady did have was SIM cards so Australian Kevin purchased one of those for 10,000 GNF (one Euro) and added 10,000 credit to it.

Once he had the card I noticed that it had the instructions to ‘Achat de Pass Internet’ – buy an internet pass, so he popped the card in and we made the call. Thankfully it’s a text-based automated system and though in French I was able to understand what was going on and determine that for 70k GNF he could get 3Gb of data valid for a month.

Back to the nice lady with another 60k GNF. Once that had been added to his card we followed the process through and et vola! emails and messages started to arrive.

Based on that success I opted for the 105 GNF (10 Euro) option to get 5Gb of data. Now that I understood the process I was able to help a number of other people get connected. Let’s just hope that it doesn’t prove to be the same as Senegal where it works for a few hours, but then you have to go and provide ID documents – I’ll check with our new fixer Hassan tonight!

Kevin had set off as he needed a pee, but I soon found him stopped at the side of the road talking to Australia to confirm that not only was his SIM working but that there was great 3G connectivity!

We cruised through to lunch once again marvelling at how much things can change in a landscape in such a short distance. Yesterday was short grass, dusty patches and gum trees – today it’s bordering on sub-tropical jungle!

Because of the short day and the way the border crossing slows some people down and speed others up it was a different mix of people in at lunch and with only 7km to camp nobody was in any much of a hurry – it seemed me less than others, so I rolled out on my own after the usual suspects had already departed.

The last stop for the day was supposed to involve passport checks and registration, but once again Sharita was on the case so all I had to do was show my passport to a police officer, at which point Sharita ticked me off on the list – apparently the police man was getting the list at the end and as it had all our visa numbers already on it that was enough to get us ‘registered’.

The hotel we’re camping at was just up the road and I rolled in there shortly after. Rooms are an option, but my tent’s a much better bet – at least I know how clean that is, and there aren’t any hornets making nests in the corner like the room I went into to use the loo!

Slightly disappointingly there’s no electricity in this town and the hotel only runs their generator between 2100 and 0300 so getting things charged isn’t going to be an option for me – I’ll be well asleep by 2100. I’ve got my solar panel out, but there’s really not a lot of sun today so I doubt it’s going to have a lot of impact on my battery.

I found a spot under a couple of trees and swept the worst of the sand and stones off the concrete!! that my tent is now on, chased the hornets out of the bathroom so I could have a shower and washed out my cycling kit from today ready for tomorrow! 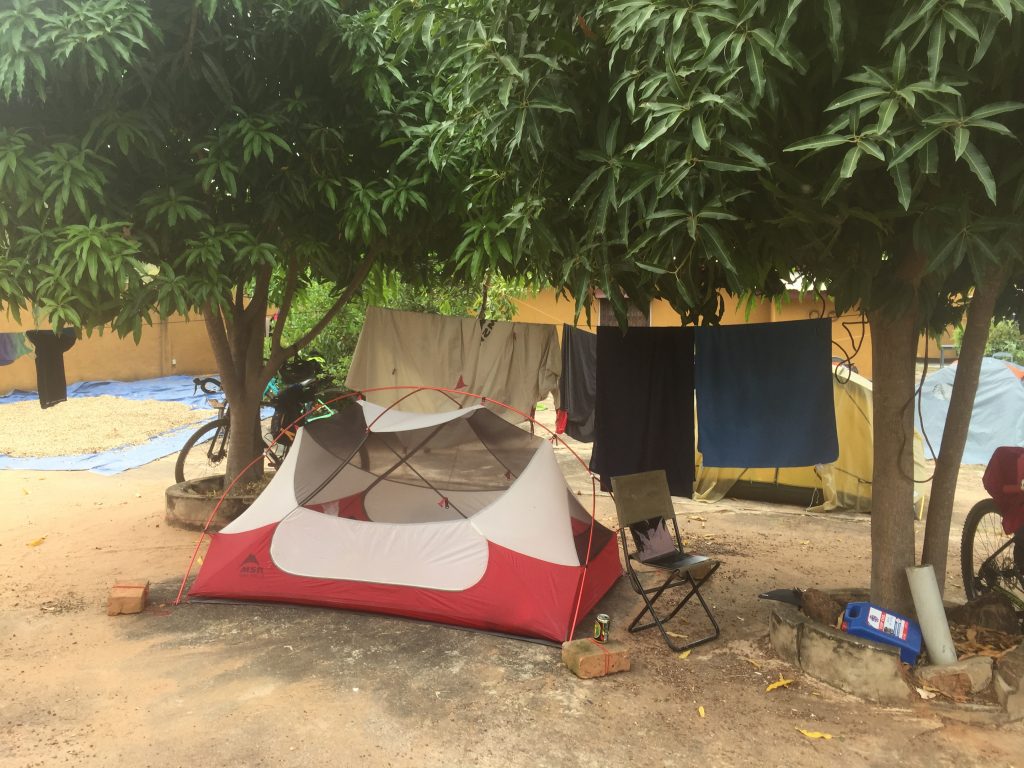 Since then I’ve got the last two blog posts uploaded thanks to the power of Guinean mobile internet which is better than you find in plenty of parts of the UK (I’m thinking of you Ants Cossar). Once my laptop went flat I took a bit of a wander towards the town, but there’s not much happening there either so repaired to my spot under the tree with a cold beer to help pass the afternoon.

We’ve got the peanut production process happening in the back of the hotel compound: 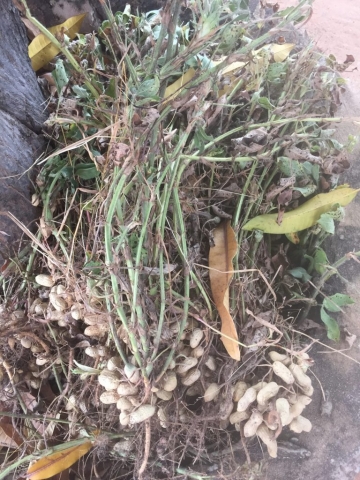 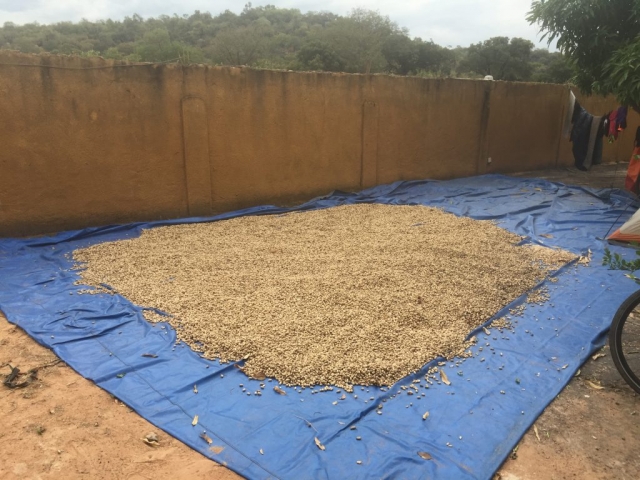 I also had a tiny visitor – do you see him? 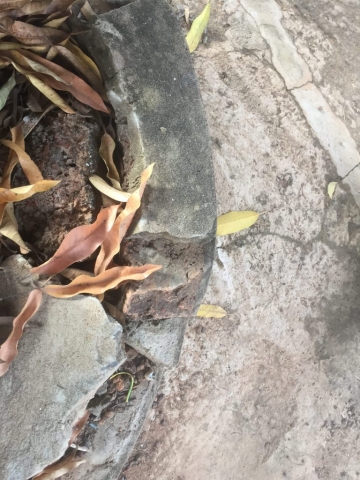 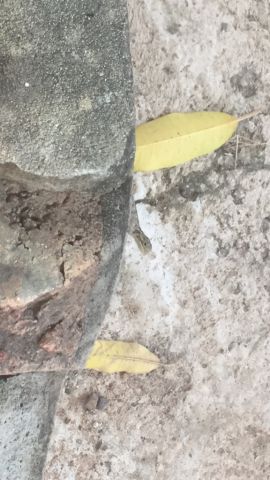 Our new fixer in Guinea is nothing if not amusing – as he introduced himself it was a cross between a speech and interpretive dance!

Mashed potatoes, meatballs and the usual salad of tomatoes and cucumbers, which on this occasion was about 70% cucumber, but one of the crew had very kindly kept a bowl of just chopped tomatoes aside for me 🙂

Canadian Kevin’s had something of an upset stomach for the last couple of days and wasn’t able to face dinner tonight – hopefully for his sake that issue resolves itself overnight – I know how horrible riding can be when you’re not well having done rather too much of that on the Silk Route.

After dinner I helped Hanne to change her tyres – she’d done as suggested and kept with her off-road tyres, but they are huge compared to her road tyres, and with another 153km of ‘brand new asphalt’ tomorrow she decided she couldn’t stand it any longer and was going to change back to her super-skinny road tyres.

Just as I was finishing up this blog post and thinking it was time to go to bed the hotel decided to start their generator which came to life with an almighty roar, and as feared a bunch of bright lights – luckily all of the lights were a. within reach, and b. had bulbs which could be unscrewed till they stopped working – that’s that problem solved. The good news though is that it means I’ve now got my laptop plugged in and charging so it’ll be back to full charge by the time the generator goes off, allegedly at midnight!

And on that note, I’m going to repair to my tent and get some sleep ready for tomorrow. 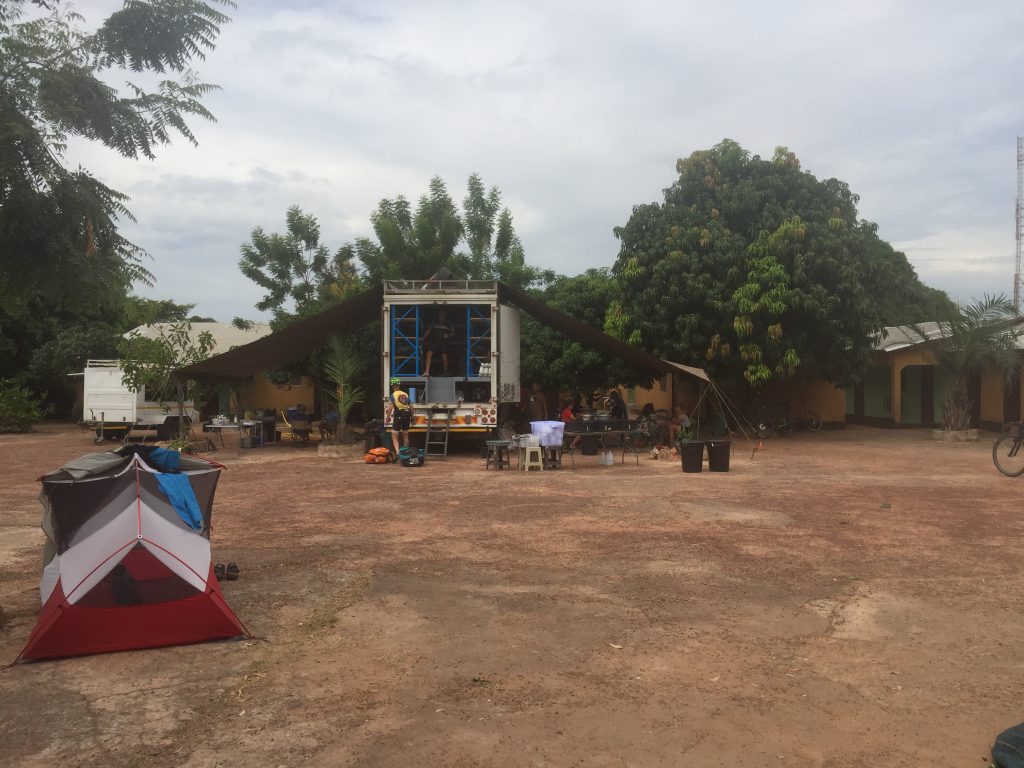 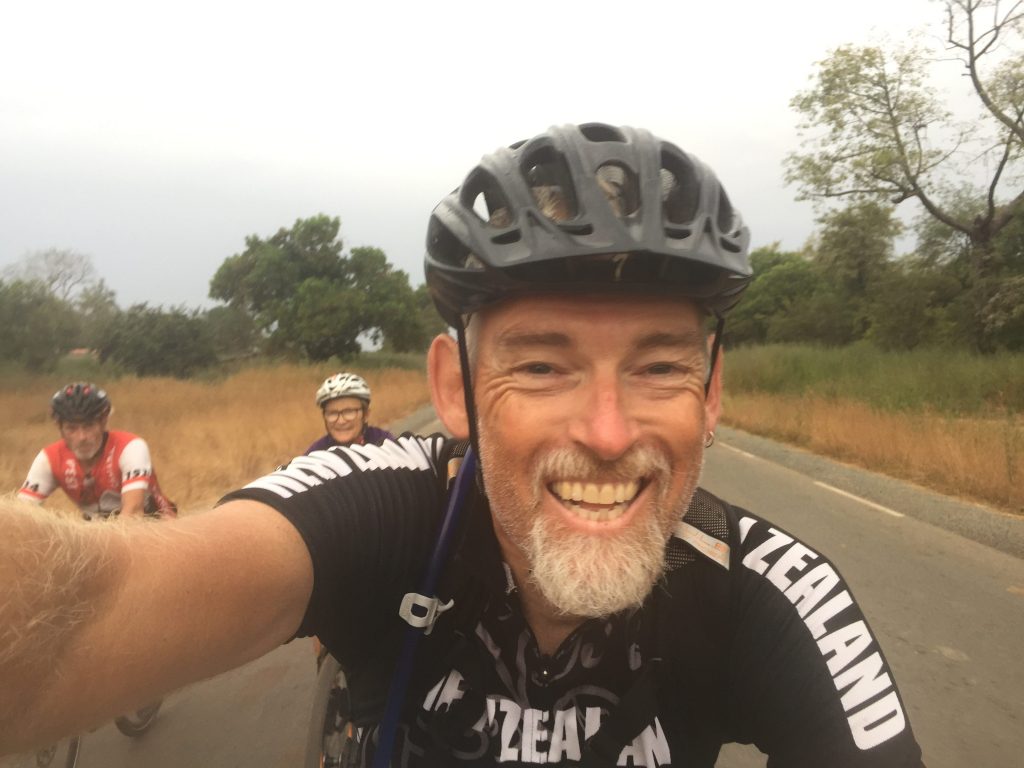 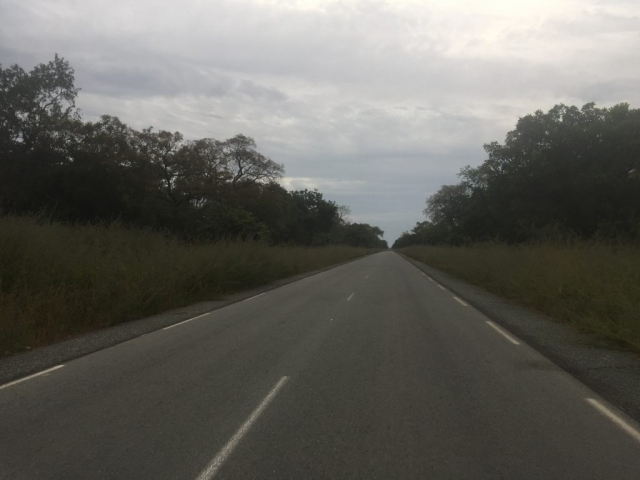 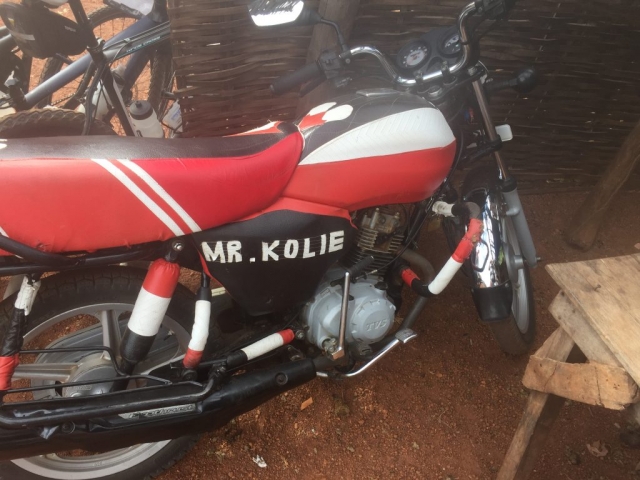 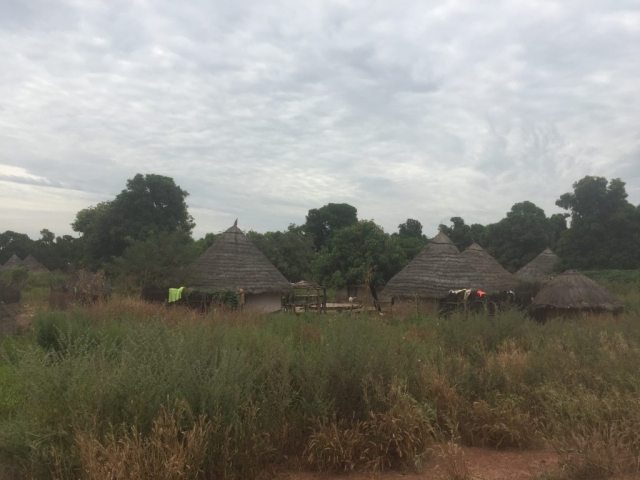 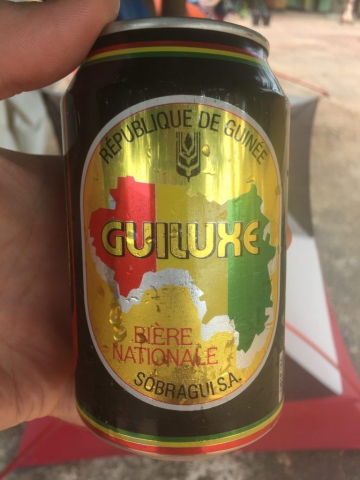 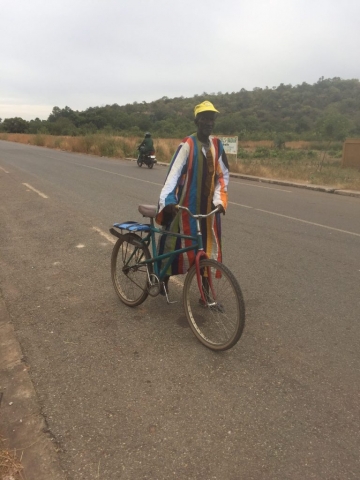 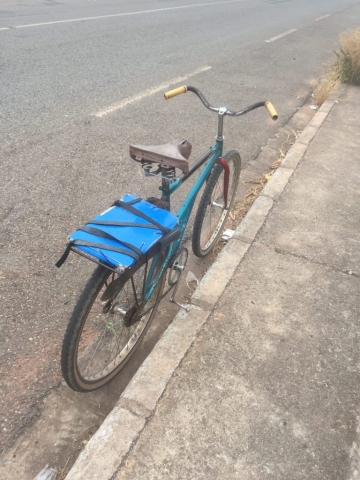 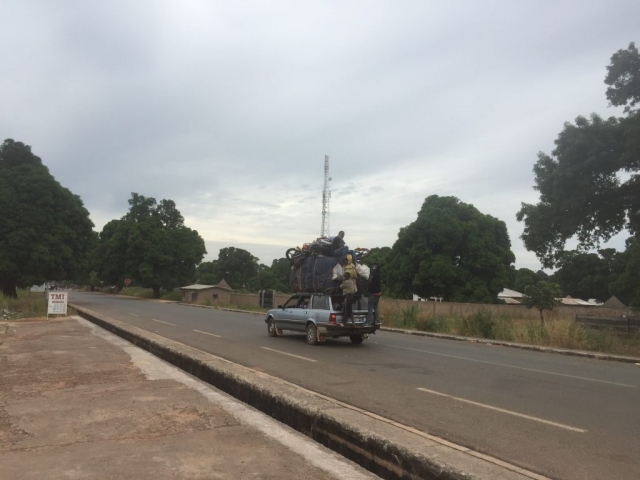 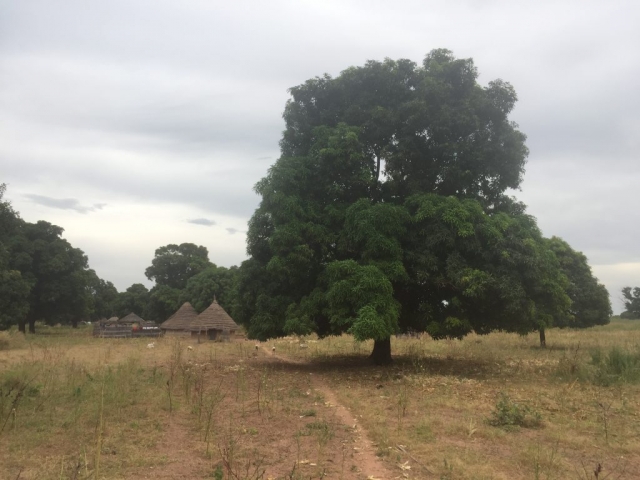 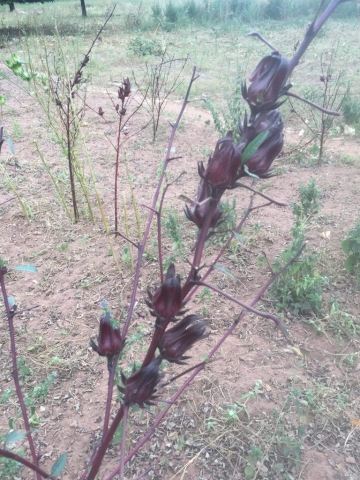