My bed didn’t prove to be very comfortable – there should have been five boards running length-wise down the bed, but the one in the middle was missing which made it rather like a hammock. It was also pretty hot in our tent and there were mozies a plenty as well – all-in-all I’d have been better off doing what Lezinda did and putting my own tent up.

Sharita had sent Max route notes from their scouting over night, and they were ready for us at breakfast this morning – they’ve been able to find a way round which gets us where we need to go without adding too much distance, but keeping us off the beach. 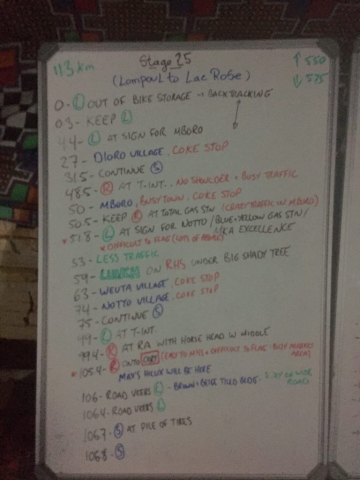 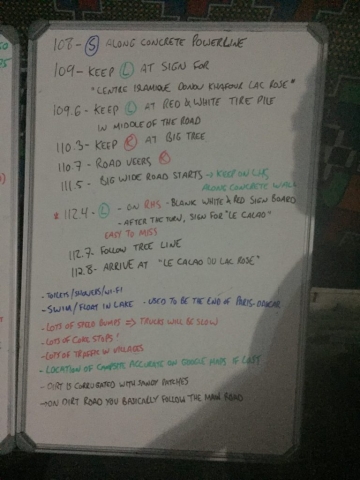 After breakfast we were shuttled back out to our bikes. Poor Noah had slept in the building our bikes were in, and hadn’t got much sleep thanks to the mosque across the road, which seemed to be active all night so he wasn’t a very happy camper this morning.

Tyres pumped back up, chains lubed and we were ready to set off.

Getting ready to ride.

We had to backtrack a short distance, but were soon on new road and undulating our way southwards – in all it was a pretty good road we were on, and the hills added some interest to the day as well.

Taking a break at Mboro for a coke Mateo discovered he had a flat tyre so we helped get that fixed before setting off again, though he didn’t immediately join us. The left turn at 51.8km was a bit hard to find in the middle of the market so we waited there for him, but still he didn’t materialise. There’d been lots of others stopped at the same store, so we figured he’d be ok and continued on to lunch.

They’d been able to find a great spot under a tree, and with reasonably good riding lots of us were in at the same time. I needed a pee, but every corner and bush seemed to have at least one local behind it so in the end I had to wait!

It was into the 40s again this afternoon so we were getting through the liquids and stopping at pretty much every opportunity. At one stage as Kevin and I pulled away from a coke stop a local lad on a bike had seen me come past and, in Kevin’s words, ridden like the clappers to catch me. Given we were doing +/- 30 km/h he was doing pretty well on his hand-painted old 10 speed. 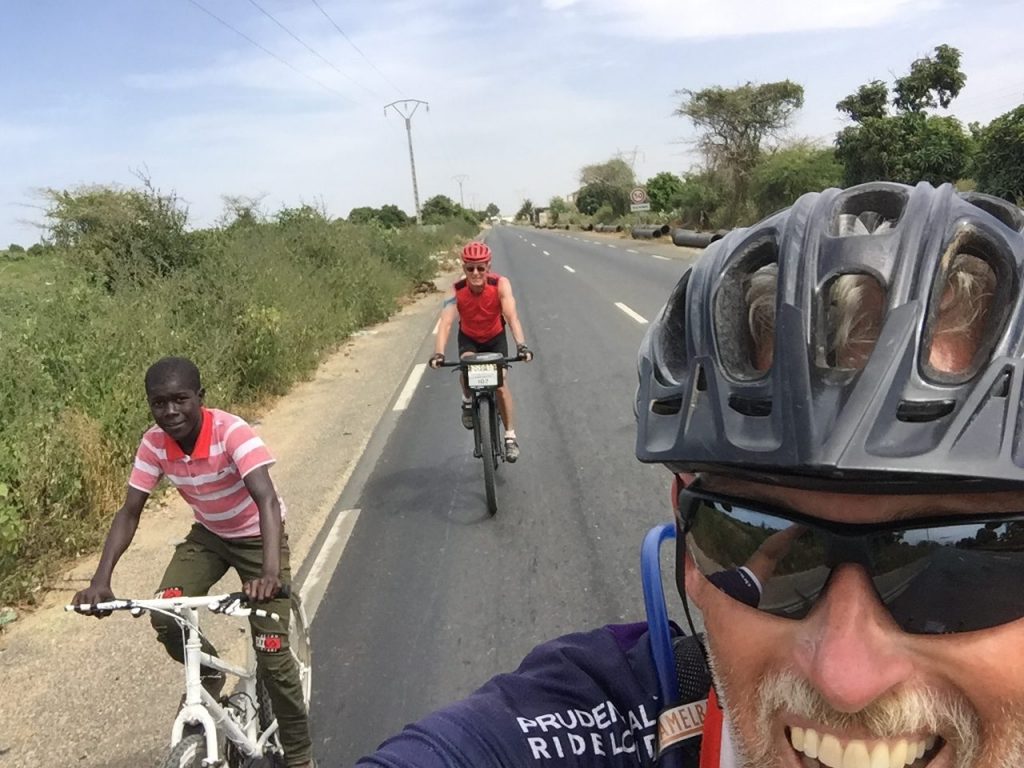 He stuck with us for about 3km before turning off in the next village we passed.

We stopped again at the village at 99km for more cold drinks and were surprised to see another rider coming towards us because we couldn’t figure out who it was – it looked like Canadian Kevin but he should have been ahead of us. As he arrived it turned out it was Kevin – he was drying out, so had made an extra stop – he’d seen us go by and had yelled, but we’d not heard him.

We carried on together heading for the right turn which would take us down to camp. A little while later we spotted a bike at the side of the road with a rider lying beside it – as we approached it turned out to be Charles who had joined us for a few days. He’d done the Cairo to Cape Town trip a few years back, and now lived in Dakar so was riding with us for three days.

Things weren’t as bad as it had seemed as he wasn’t injured, but he wasn’t happy – basically every muscle from his waist down had cramped! He’d managed to get off his bike, but every time he moved another muscle would cramp.

We poured liquids and sugar in to him, and I left the Kevins with him and rode ahead to where Max was waiting at the turn to get him to go back to collect Charles. The right turn was really easy to miss, so I hung out there in case anyone else came along while Max went back i the truck.

They were soon back, and I waited for the Kevins but they didn’t appear – we thought we saw them coming in to town, but they didn’t arrive. I found out later that they’d stopped for more cold drinks at the service station at the edge of town.

I set off to do the last 7km in to camp – the first km of it was so soft that I ended up walking about as much of it as I could ride. Thankfully it got a little better as I continued, though there were still places I needed to walk.

This is also where the Paris – Dakar Rally used to end when it actually went from Paris to Dakar (after security threats in Mauritania in 2008 led to that year’s rally being cancelled it’s now held in South America, though retains the name).

It’s a pretty good campsite we’re at complete with swimming pool, showers, bar etc, but we’re camping on gravel again which I rather hoped we’d left behind. Tent up, shower, some clothing rinsed, and some sitting round drinking beer rounded out the afternoon.

Sharita’s once again out scouting a new route in to Dakar to avoid the beach – it might almost be possible to do the first section on the rising tide, but we’ve been asked not to as the crew can’t support riders in two places so we’re going to get details of a non-beach route in the morning.

In my tent tonight it’s sweltering even with the fly off – my Garmin says 32 degrees and though it’s cooler outside every time I open the zips more mozies come in so I’m having to keep things closed – hopefully it cools down soon or sleeping’s going to be something of a challenge.

Too hot, too tired, didn’t happen!

Too hot, too tired, didn’t happen! 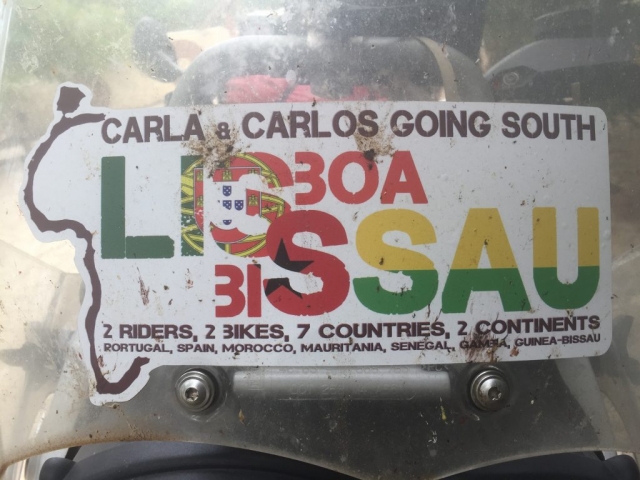 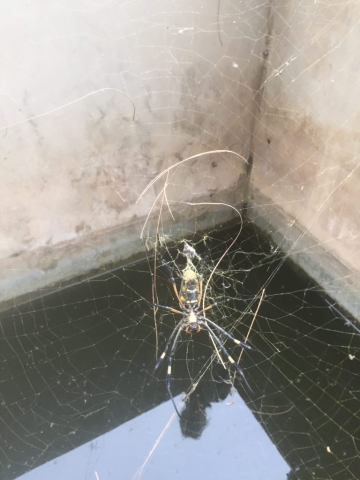