It did indeed get pretty chilly overnight – it was 8ºC when I set off this morning just before sunrise – a sign of things to come I suspect. 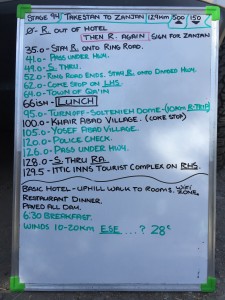 Out on the road and it was still a bit gloomy though at least at that point it was still calm. I passed Roger as I turned onto the road which we’ll follow all the way through to the Turkish border and unfortunately the wind started to build shortly afterwards.

I caught up with Grant after about 25km and we fell into our regular routine of 2km each at the front as we tried to maintain a reasonable pace into the wind. Lunch came along a little earlier than expected and provided a welcome break from being blown about.

Back on the road and shortly later we could see the Dome of Soltaniyeh off to our left – it’s pretty impressive looking, but having already asked Google about it yesterday I knew that it was “undergoing extensive renovation” and given that it meant a 10km detour we decided against going in. I heard later from Michael that it was ‘interesting enough’ but that you couldn’t see anything inside because it was full of scaffolding.

By around 90km the wind had dropped away and the road was also tending downwards so we were making good time when we decided to stop for ice-cream at 105km. 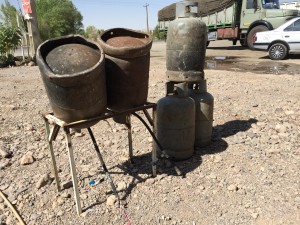 Cost me 28km because I managed to leave my phone on the counter of the store this was outside and I didn’t realise till I was 14km down the road, and less than 10km from the hotel. Clearly it would have been quicker, and a whole lot easier to have continued in to the hotel, got in a taxi and gone back to get my phone that way, however I didn’t think of that till I was nearly back at the shop.

The process also gave Ivan something of a surprise – seeing me riding towards him! I collected my phone from the very kind chap in the shop, bought another ice-cream off him, and then continued on my way again, catching up with Ivan about 5km back down the route.

Into Zanjan and we have the pleasure of a hotel for the night which means a shower and clean clothes were next on the agenda. From there I headed into town (our hotel’s quite a way out), initially just to grab some water but I figured I may as well carry on and check out the sights.

Of interest was Rakhatshor-Khaneh which Lonely Planet describes as

Built in 1926 but looking considerably older, the unique dome-and-column subterranean hall whose water channels were originally constructed as a public laundry-place

It certainly lived up to that explanation (more photos below) 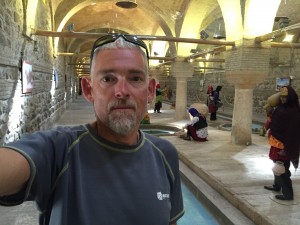 Me blocking the view of Rakhatshor-Khaneh

Next door there was also a very nice craft market (for want of a better name) with some lovely looking things in it – one piece I was particularly taken with but unfortunately I didn’t have enough Rials on me to purchase it, and the nice lady at the stall wasn’t willing to take US dollars. Bit of a shame really, and because this is Iran I couldn’t use an ATM to get cash out, and it’s Friday afternoon so pretty much everything else (including the bazaar and currency exchange) is closed.

Walking back to the hotel (some 5km from the centre of town) I began hatching a plan to go back this evening if the hotel could change money, but unfortunately that wasn’t possible. We leave early tomorrow morning, but maybe I can stay in town and ride later… hmmm….

Since we’re in a hotel we ate dinner at a restaurant this evening which turned out to be a Turkish restaurant which gave us a taste of things to come. It would also appear that they’re the local off-license, with four bottles of whiskey making their way home with assorted people!

Back to the hotel and I’m still scheming for the morning – we’ll see what happens.

A bank (dirt that is, not financial institution) so I didn’t waste any electrons on it. 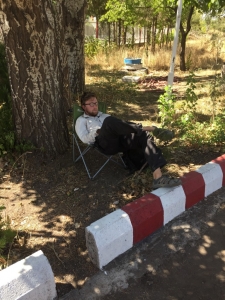 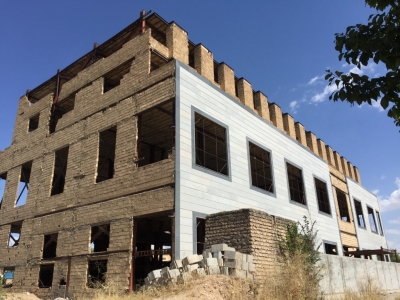 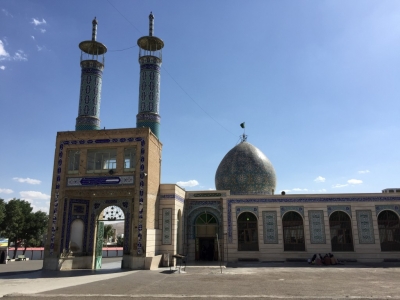 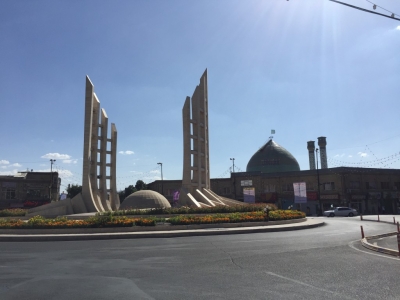 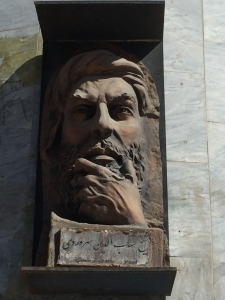 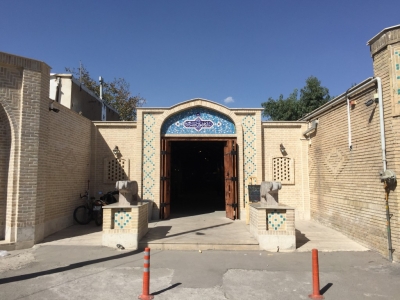 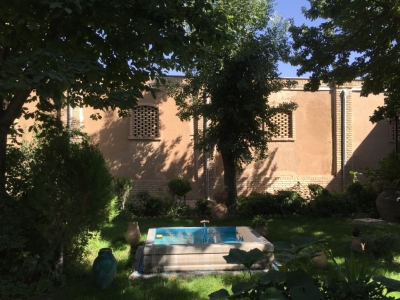 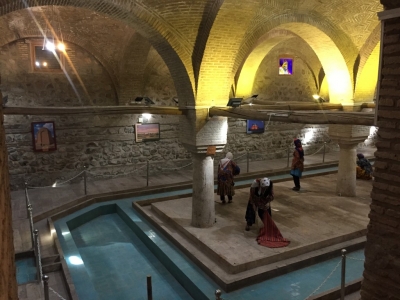 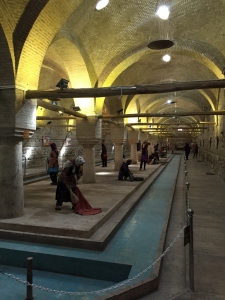 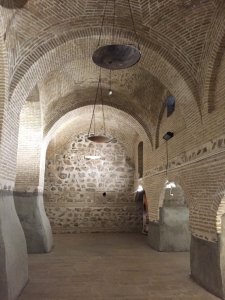 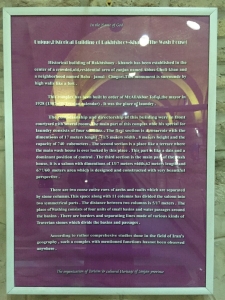 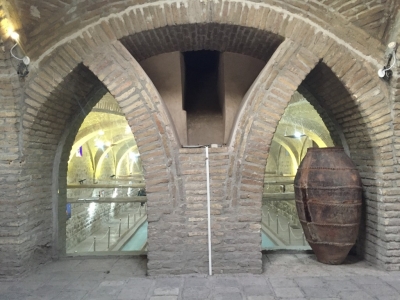 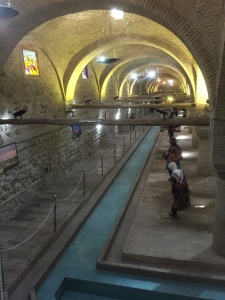 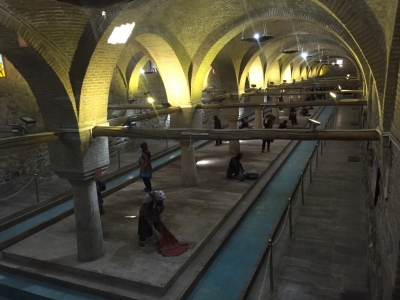 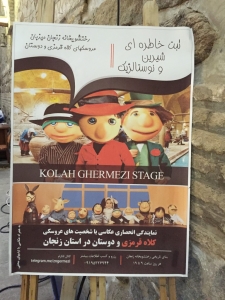 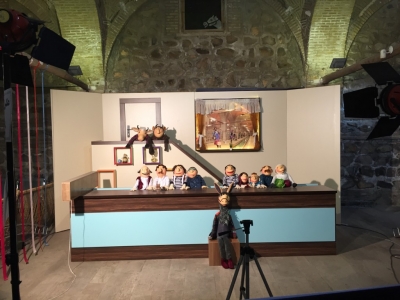 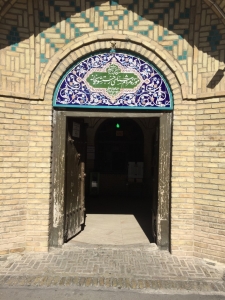 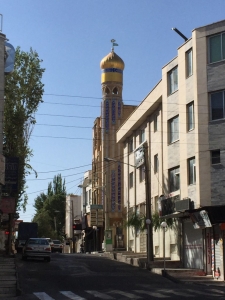 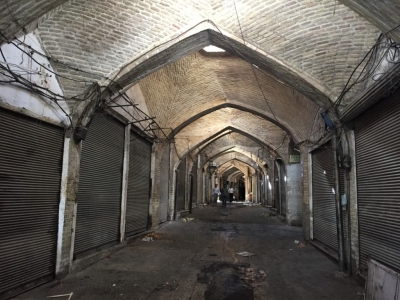 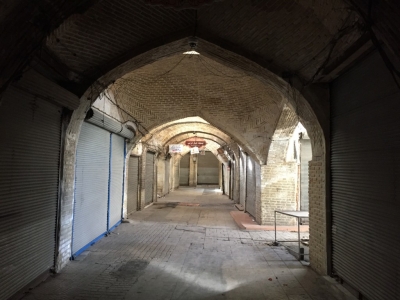 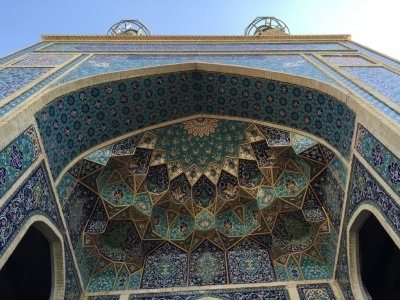