All the usual commotion in the night, with the soccer teams returning and yahooing round for ages and then the music in town cranking up and playing through till dawn, so as is often the way in West Africa not a lot of sleep was had!

I’m pretty sure that’s the real difference as to why this end of the tour is proving so much harder for myself and many others – we’re just not sleeping properly! When you’re pushing yourself physically day-in and day-out riding in challenging climatic conditions, not being able to sleep well makes it super hard for your body recover after each day so we’re much more susceptible to any bug that comes our way.

That said I was feeling better this morning than I had at the end of yesterday so I resolved to ride some of the day, but having eating basically nothing yesterday the whole 137km wasn’t going to be sensible so I opted to take the truck to lunch, and ride from there.

At riders’ meeting this morning:

Max: …and we’re camped by a river so it’s going to be pretty nice spot

Mateo: What music will they be playing?

Let us hope that this is not the case – let us hope for a nice quiet spot away from everyone else! 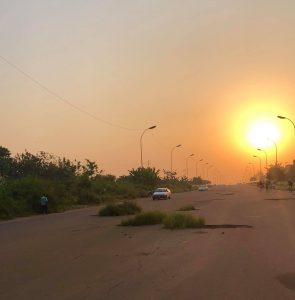 It didn’t take long to get our of the city and on to the highway where it was still pretty foggy. To be honest it didn’t look that safe to me – while Lezinda had turned on her lights, and slowed down because of the conditions, plenty of the locals didn’t seem to think either of those were necessary.

It’s also a pretty serious highway – think A34 / Waikato Expressway, / insert name of dual carriageway which carries traffic between two major cities in your country – so combined with the fog I’m actually kind of glad that I’m not riding!

Ray and Michel are generally only doing half days at present and so were also in the van, as was Caroline – when Doug asked her how come she wasn’t riding the morning she was like “I can’t be bothered”

Max spotted a track off the side of the road which proved to make a good lunch stop at just on 78km and we pulled in there. I helped to get bikes down, and then with the start of the lunch setup, but again I didn’t think it was a good idea for me to be handling food, so made myself a sandwich to go, grabbed an apple and headed out. 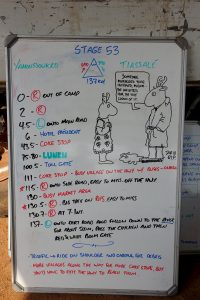 By the time I was on the road the fog was just starting to burn off so initially it remained pleasantly cool.

Riding on a highway like this is in some ways quite relaxing because the surface is smooth, the shoulder is wide, the grade never particularly steep, and you’re not passing through villages full of children shouting the local ‘greeting’ (which translates as ‘unripe pumpkin’) at you. The only drawback is the occasional idiot passing too close, and too fast.

At the point at which we cut off the highway the hills returned again, and we were back to regular rolling countryside with a climb-and-drop about every 1 – 2 km. Also quite good fun in its own way, and this was a nice quiet road with hardly any traffic at all.

At what was 42km to me, and my usual morning tea time I found myself in a village with a decent coke stop including cold drinks so I took advantage of that. Tonic seems to be a ‘thing’ in CI, which makes a really nice change from the litres of Sprite I had been drinking.

A little while later the dinner truck came past me, which meant my timing was looking pretty good because they were going to be in to camp before me so I’d have my ‘stuff’ when I got there. They did get held up at the town at 130km and I caught them again there, and then a couple of km later when they were stopped at some roadworks, so they were only just getting themselves parked when I got to camp.

Because my distance was completely ‘off’ having only started at lunch I was following the GPX track to let me know when I was going to get to camp and I was almost there when I bumped off some gravel back to to tarmac – at this point one of my water bottles jumped out of its cage and began to roll across the road… right towards some flagging tape I’ve have certainly missed had that not happened!

Down the gravel road to camp and it is indeed a nice spot beside the river. I’ve got my tent up what I hoped was far enough back in the bushes that I wouldn’t get any near neighbours (it worked) and then took a wash.

The board was suggesting that I should wash in the river, and several people did go in, but as I’m still taking antibiotics for an infected graze, swimming in what looks like pretty questionable water (to me) doesn’t seem like the best idea.

This afternoon is also one of the hottest and most humid we’ve had in a while, so mostly we’re sitting under the trees near the river bank hoping to catch as much of the breeze that occasionally wafts down as we can. 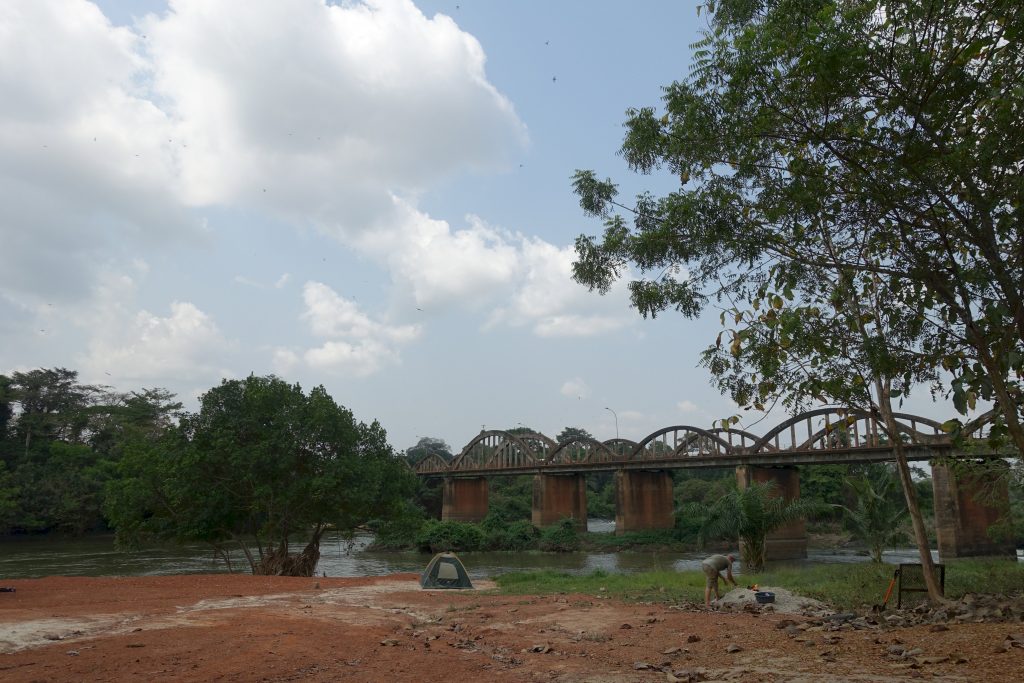 By lunch Robert had had enough, so was waiting there to come in with the lunch truck, when Max came back to check on people and so brought him in more directly. On the way they stopped at a store and he very kindly brought about 20 cold drinks, including several beers in to camp for us!

David and Eleanor had also walked in to town and suggested to a guy that runs a bar there that if he was to load up a couple of chilly bins with cold beer and soft drink there was plenty of money to be made just over the bridge – 20 minutes later he showed up, and ended up having to call for additional supplies such was the demand!

It’s also really interesting watching the highs and lows of other riders in the group as they have good days and bad and seeing the same thing happen to myself. A few days back Joe was not feeling that well and finding the riding tough. Today he’s the happiest man in CI – he had a great ride this morning, was feeling strong, and shortly after he got to camp someone handed him a cold beer – the prefect end to a great day!

We’ve had two birthdays in the group recently – Philippa’s when she was in Man taking care of Andre, and Mike’s on the rest day, so tonight Errol has baked four cakes for us for pudding!

Which reminds me that I don’t think I’ve updated you on Andre – he ended up being flown from Man to Abidjan by air ambulance and was admitted to a private clinic that night. The following day he was seen by a surgeon and he was operated on later that same day. He’s expected to be discharged from hospital on Tuesday morning, will stay that night at a hotel near the airport, and by the time we’re being bussed through Abidjan on Wednesday morning he’ll be on a flight home to recover.

I drew the dishes straw tonight, but thankfully it was a relatively simple job this time round without the baking trays I’ve met on the last two times.

Given how hot it had been in the late afternoon it cooled down surprisingly quickly, so let’s hope for a good night’s sleep. 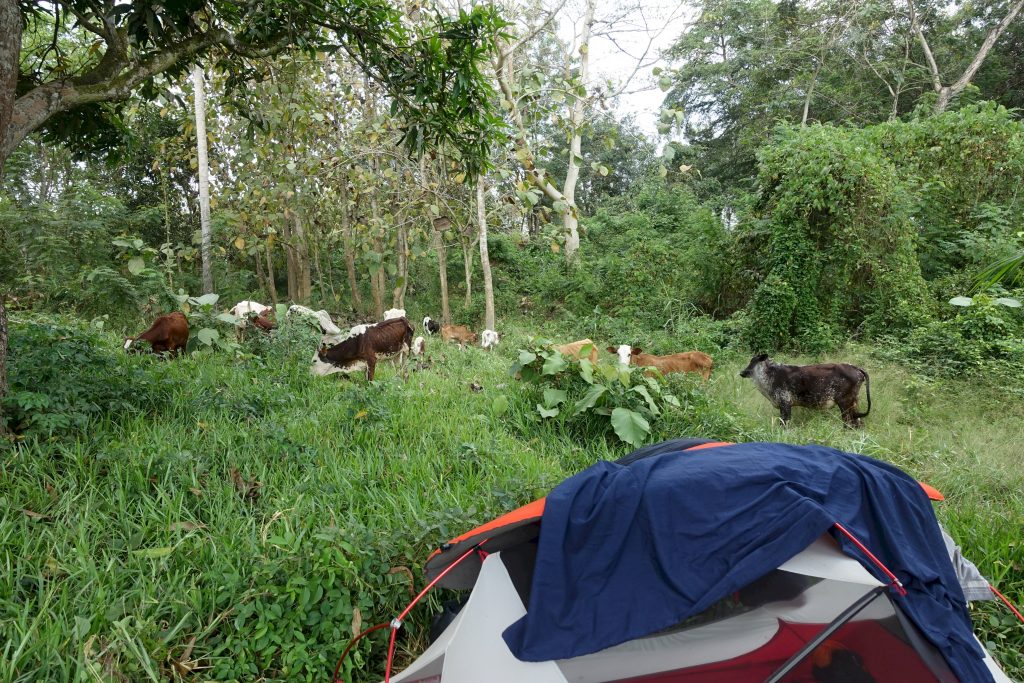 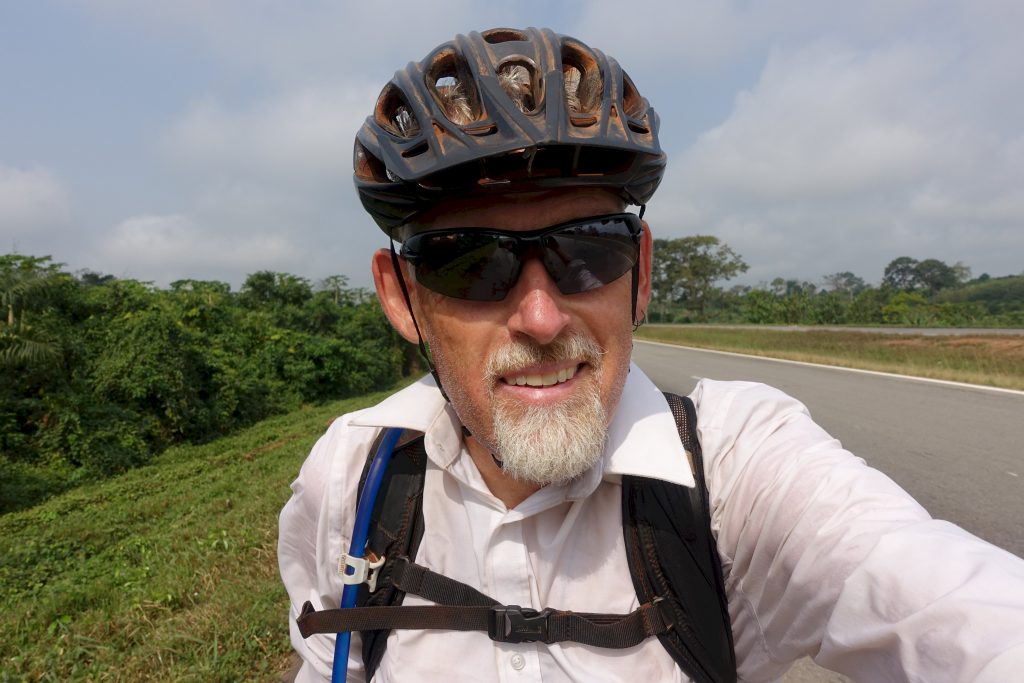 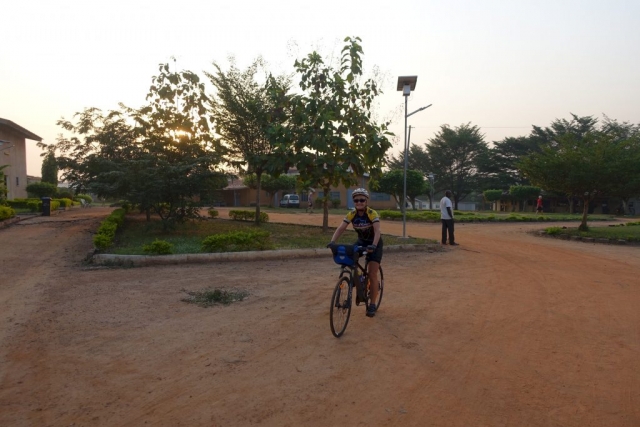 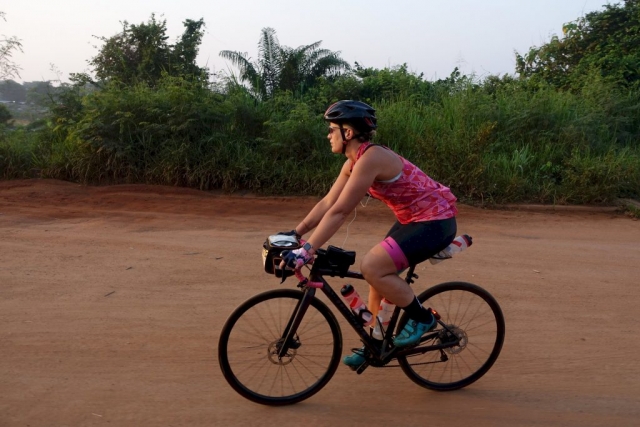 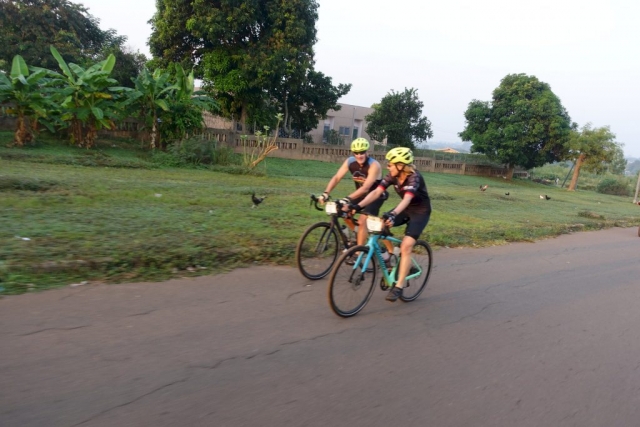 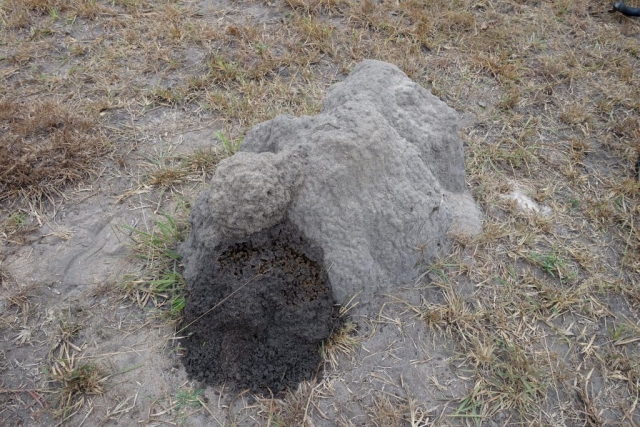 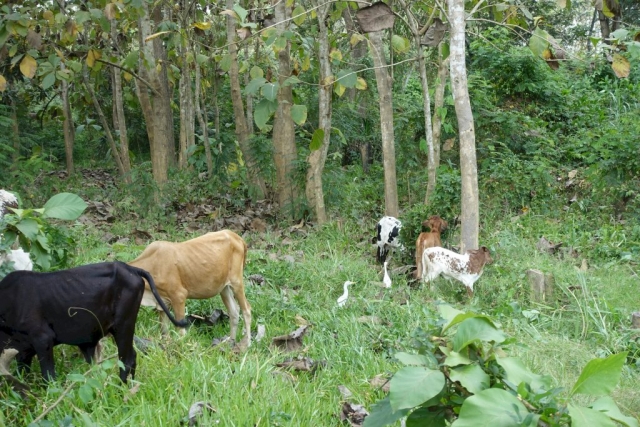