I’ve ridden home from work this evening and this weekend I’m doing a sportive in the New Forest – 110km which will hopefully feel like old times, but I suspect given how little riding I’ve done recently won’t be quite so enjoyable.

The observant amongst you will realise that the New Forest means I’m back in the UK – our time in Latvia didn’t go quite to plan (long story not worth retelling here – if you’re really interested let me know and I’ll fill you in) so after 15 months (or thereabouts) we’re currently living in Newbury in the UK. Not entirely sure how long for, but that’s another long story not worth telling here!

One thing I am sure on is that this time in six months I’ll be on my way out of Casablanca, Morocco and headed south towards Cape Coast, Ghana where I’ll arrive some 10 weeks and 6,200km (or there abouts) later.

I say ‘there abouts’, because in the last bulletin from TDA they had this to say

[and] due to the nature of the areas we’ll be traveling through, there are challenges that will only be fully realized [sic] on route

[and] a lot of things won’t go according to plan no matter how much we plan, or how hard we work.

If you’re interested in knowing more about the trip take a look at the TDA West Africa en Vélo website where there’s lots more information. The route looks something like this 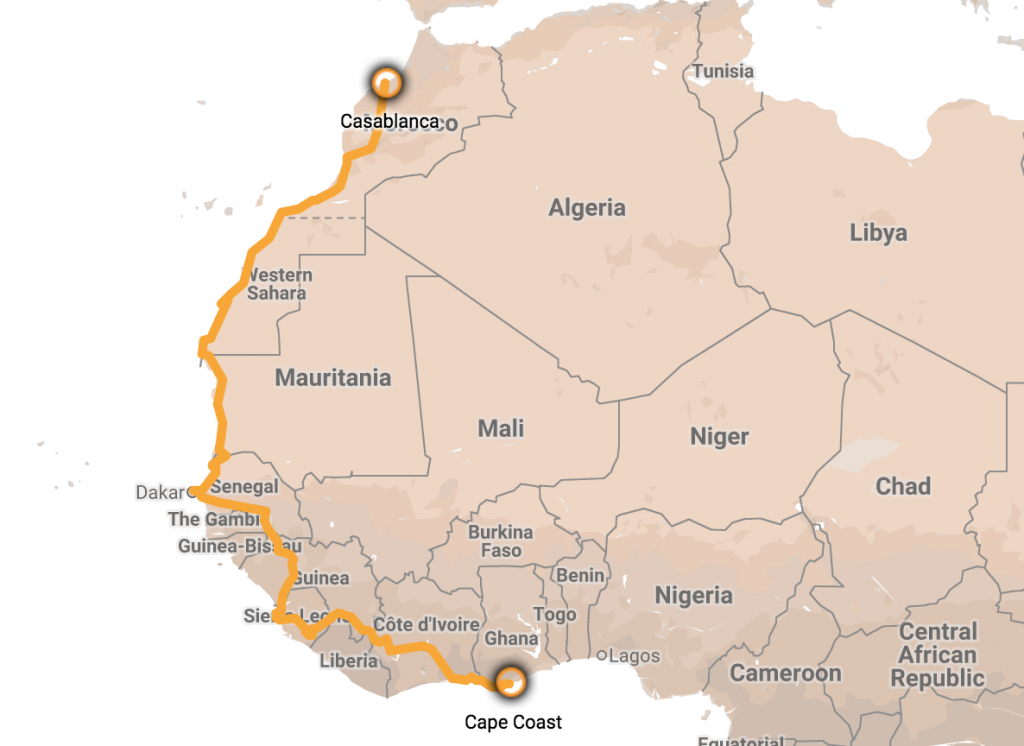 Right now the focus is on getting back to the level of bike fitness I’ll need before we start – the last 18 months have been somewhat more relaxed than ideal, but I’m sure with a bit of focus things will soon be back on track.

I’ll be updating this site again as I go along, though probably not terribly frequently till we head off, and from all reports not as often as I could in Asia along the way, but I hope you’ll stick with me on the next adventure!